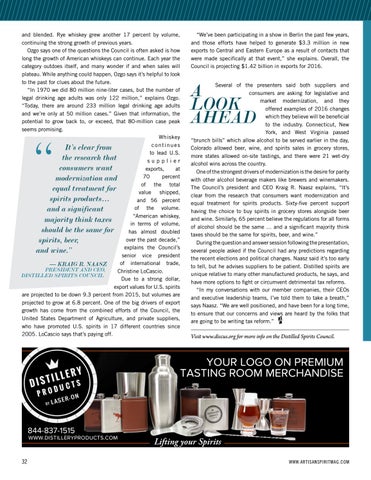 and blended. Rye whiskey grew another 17 percent by volume, continuing the strong growth of previous years. Ozgo says one of the questions the Council is often asked is how long the growth of American whiskeys can continue. Each year the category outdoes itself, and many wonder if and when sales will plateau. While anything could happen, Ozgo says it’s helpful to look to the past for clues about the future. “In 1970 we did 80 million nine-liter cases, but the number of legal drinking age adults was only 122 million,” explains Ozgo. “Today, there are around 233 million legal drinking age adults and we’re only at 50 million cases.” Given that information, the potential to grow back to, or exceed, that 80-million case peak seems promising. Whiskey continues It’s clear from to lead U.S. the research that supplier consumers want exports, at 70 percent modernization and of the total equal treatment for value shipped, spirits products… and 56 percent of the volume. and a significant “American whiskey, majority think taxes in terms of volume, should be the same for has almost doubled over the past decade,” spirits, beer, explains the Council’s and wine.” senior vice president of international trade, — KRAIG R. NAASZ PRESIDENT AND CEO, Christine LoCascio. DISTILLED SPIRITS COUNCIL Due to a strong dollar, export values for U.S. spirits are projected to be down 9.3 percent from 2015, but volumes are projected to grow at 6.8 percent. One of the big drivers of export growth has come from the combined efforts of the Council, the United States Department of Agriculture, and private suppliers, who have promoted U.S. spirits in 17 different countries since 2005. LoCascio says that’s paying off.

“We’ve been participating in a show in Berlin the past few years, and those efforts have helped to generate $3.3 million in new exports to Central and Eastern Europe as a result of contacts that were made specifically at that event,” she explains. Overall, the Council is projecting $1.42 billion in exports for 2016.

Several of the presenters said both suppliers and consumers are asking for legislative and market modernization, and they offered examples of 2016 changes which they believe will be beneficial to the industry. Connecticut, New York, and West Virginia passed “brunch bills” which allow alcohol to be served earlier in the day, Colorado allowed beer, wine, and spirits sales in grocery stores, more states allowed on-site tastings, and there were 21 wet-dry alcohol wins across the country. One of the strongest drivers of modernization is the desire for parity with other alcohol beverage makers like brewers and winemakers. The Council’s president and CEO Kraig R. Naasz explains, “It’s clear from the research that consumers want modernization and equal treatment for spirits products. Sixty-five percent support having the choice to buy spirits in grocery stores alongside beer and wine. Similarly, 65 percent believe the regulations for all forms of alcohol should be the same … and a significant majority think taxes should be the same for spirits, beer, and wine.” During the question and answer session following the presentation, several people asked if the Council had any predictions regarding the recent elections and political changes. Naasz said it’s too early to tell, but he advises suppliers to be patient. Distilled spirits are unique relative to many other manufactured products, he says, and have more options to fight or circumvent detrimental tax reforms. “In my conversations with our member companies, their CEOs and executive leadership teams, I’ve told them to take a breath,” says Naasz. “We are well positioned, and have been for a long time, to ensure that our concerns and views are heard by the folks that are going to be writing tax reform.”

Visit www.discus.org for more info on the Distilled Spirits Council.