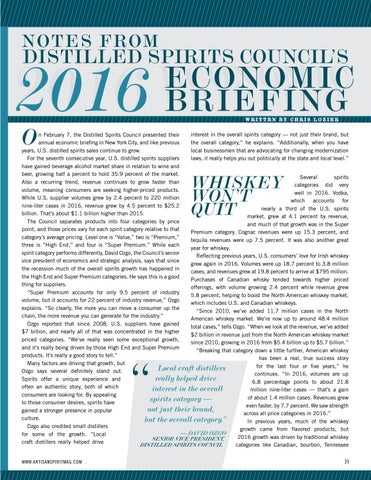 interest in the overall spirits category — not just their brand, but n February 7, the Distilled Spirits Council presented their the overall category,” he explains. “Additionally, when you have annual economic briefing in New York City, and like previous local businessmen that are advocating for changing modernization years, U.S. distilled spirits sales continue to grow. laws, it really helps you out politically at the state and local level.” For the seventh consecutive year, U.S. distilled spirits suppliers have gained beverage alcohol market share in relation to wine and beer, growing half a percent to hold 35.9 percent of the market. Several spirits Also a recurring trend, revenue continues to grow faster than categories did very volume, meaning consumers are seeking higher-priced products. well in 2016. Vodka, While U.S. supplier volumes grew by 2.4 percent to 220 million which accounts for nine-liter cases in 2016, revenue grew by 4.5 percent to $25.2 nearly a third of the U.S. spirits billion. That’s about $1.1 billion higher than 2015. market, grew at 4.1 percent by revenue, The Council separates products into four categories by price and much of that growth was in the Super point, and those prices vary for each spirit category relative to that Premium category. Cognac revenues were up 15.3 percent, and category’s average pricing. Level one is “Value,” two is “Premium,” tequila revenues were up 7.5 percent. It was also another great three is “High End,” and four is “Super Premium.” While each year for whiskey. spirit category performs differently, David Ozgo, the Council’s senior Reflecting previous years, U.S. consumers’ love for Irish whiskey vice president of economics and strategic analysis, says that since grew again in 2016. Volumes were up 18.7 percent to 3.8 million the recession much of the overall spirits growth has happened in cases, and revenues grew at 19.8 percent to arrive at $795 million. the High End and Super Premium categories. He says this is a good Purchases of Canadian whisky tended towards higher priced thing for suppliers. offerings, with volume growing 2.4 percent while revenue grew “Super Premium accounts for only 9.5 percent of industry 5.8 percent, helping to boost the North American whiskey market, volume, but it accounts for 22 percent of industry revenue,” Ozgo which includes U.S. and Canadian whiskeys. explains. “So clearly, the more you can move a consumer up the “Since 2010, we’ve added 11.7 million cases in the North chain, the more revenue you can generate for the industry.” American whiskey market. We’re now up to around 48.4 million Ozgo reported that since 2008, U.S. suppliers have gained total cases,” tells Ozgo. “When we look at the revenue, we’ve added $7 billion, and nearly all of that was concentrated in the higher $2 billion in revenue just from the North American whiskey market priced categories. “We’ve really seen some exceptional growth, since 2010, growing in 2016 from $5.4 billion up to $5.7 billion.” and it’s really being driven by those High End and Super Premium “Breaking that category down a little further, American whiskey products. It’s really a good story to tell.” has been a real, true success story Many factors are driving that growth, but for the last four or five years,” he Local craft distillers Ozgo says several definitely stand out. continues. “In 2016, volumes are up Spirits offer a unique experience and really helped drive 6.8 percentage points to about 21.8 often an authentic story, both of which interest in the overall million nine-liter cases — that’s a gain consumers are looking for. By appealing of about 1.4 million cases. Revenues grew spirits category — to those consumer desires, spirits have even faster, by 7.7 percent. We saw strength not just their brand, gained a stronger presence in popular across all price categories in 2016.” culture. but the overall category.” In previous years, much of the whiskey Ozgo also credited small distillers growth came from flavored products, but — DAVID OZGO for some of the growth. “Local 2016 growth was driven by traditional whiskey SENIOR VICE PRESIDENT, craft distillers really helped drive DISTILLED SPIRITS COUNCIL categories like Canadian, bourbon, Tennessee