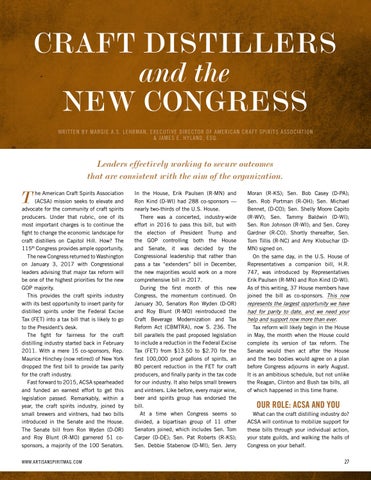 Leaders effectively working to secure outcomes that are consistent with the aim of the organization.

he American Craft Spirits Association (ACSA) mission seeks to elevate and advocate for the community of craft spirits producers. Under that rubric, one of its most important charges is to continue the fight to change the economic landscape for craft distillers on Capitol Hill. How? The 115th Congress provides ample opportunity. The new Congress returned to Washington on January 3, 2017 with Congressional leaders advising that major tax reform will be one of the highest priorities for the new GOP majority. This provides the craft spirits industry with its best opportunity to insert parity for distilled spirits under the Federal Excise Tax (FET) into a tax bill that is likely to go to the President’s desk. The fight for fairness for the craft distilling industry started back in February 2011. With a mere 15 co-sponsors, Rep. Maurice Hinchey (now retired) of New York dropped the first bill to provide tax parity for the craft industry. Fast forward to 2015, ACSA spearheaded and funded an earnest effort to get this legislation passed. Remarkably, within a year, the craft spirits industry, joined by small brewers and vintners, had two bills introduced in the Senate and the House. The Senate bill from Ron Wyden (D-OR) and Roy Blunt (R-MO) garnered 51 cosponsors, a majority of the 100 Senators. WWW.ARTISANSPIRITMAG.COM

In the House, Erik Paulsen (R-MN) and Ron Kind (D-WI) had 288 co-sponsors — nearly two-thirds of the U.S. House. There was a concerted, industry-wide effort in 2016 to pass this bill, but with the election of President Trump and the GOP controlling both the House and Senate, it was decided by the Congressional leadership that rather than pass a tax “extenders” bill in December, the new majorities would work on a more comprehensive bill in 2017. During the first month of this new Congress, the momentum continued. On January 30, Senators Ron Wyden (D-OR) and Roy Blunt (R-MO) reintroduced the Craft Beverage Modernization and Tax Reform Act (CBMTRA), now S. 236. The bill parallels the past proposed legislation to include a reduction in the Federal Excise Tax (FET) from $13.50 to $2.70 for the first 100,000 proof gallons of spirits, an 80 percent reduction in the FET for craft producers, and finally parity in the tax code for our industry. It also helps small brewers and vintners. Like before, every major wine, beer and spirits group has endorsed the bill. At a time when Congress seems so divided, a bipartisan group of 11 other Senators joined, which includes Sen. Tom Carper (D-DE); Sen. Pat Roberts (R-KS); Sen. Debbie Stabenow (D-MI); Sen. Jerry

Moran (R-KS); Sen. Bob Casey (D-PA); Sen. Rob Portman (R-OH); Sen. Michael Bennet, (D-CO); Sen. Shelly Moore Capito (R-WV); Sen. Tammy Baldwin (D-WI); Sen. Ron Johnson (R-WI); and Sen. Corey Gardner (R-CO). Shortly thereafter, Sen. Tom Tillis (R-NC) and Amy Klobuchar (DMN) signed on. On the same day, in the U.S. House of Representatives a companion bill, H.R. 747, was introduced by Representatives Erik Paulsen (R-MN) and Ron Kind (D-WI). As of this writing, 37 House members have joined the bill as co-sponsors. This now represents the largest opportunity we have had for parity to date, and we need your help and support now more than ever. Tax reform will likely begin in the House in May, the month when the House could complete its version of tax reform. The Senate would then act after the House and the two bodies would agree on a plan before Congress adjourns in early August. It is an ambitious schedule, but not unlike the Reagan, Clinton and Bush tax bills, all of which happened in this time frame.

OUR ROLE: ACSA AND YOU What can the craft distilling industry do? ACSA will continue to mobilize support for these bills through your individual action, your state guilds, and walking the halls of Congress on your behalf.