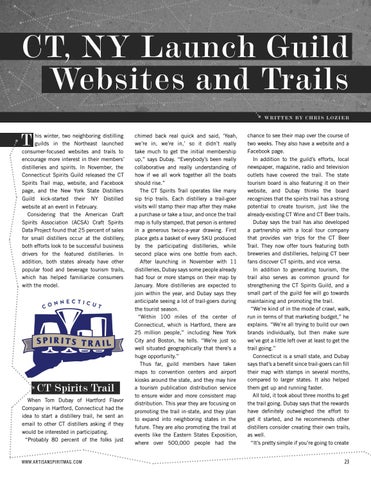 his winter, two neighboring distilling guilds in the Northeast launched consumer-focused websites and trails to encourage more interest in their members’ distilleries and spirits. In November, the Connecticut Spirits Guild released the CT Spirits Trail map, website, and Facebook page, and the New York State Distillers Guild kick-started their NY Distilled website at an event in February. Considering that the American Craft Spirits Association (ACSA) Craft Spirits Data Project found that 25 percent of sales for small distillers occur at the distillery, both efforts look to be successful business drivers for the featured distilleries. In addition, both states already have other popular food and beverage tourism trails, which has helped familiarize consumers with the model.

CT Spirits Trail When Tom Dubay of Hartford Flavor Company in Hartford, Connecticut had the idea to start a distillery trail, he sent an email to other CT distillers asking if they would be interested in participating. “Probably 80 percent of the folks just

chimed back real quick and said, ‘Yeah, we’re in, we’re in,’ so it didn’t really take much to get the initial membership up,” says Dubay. “Everybody’s been really collaborative and really understanding of how if we all work together all the boats should rise.” The CT Spirits Trail operates like many sip trip trails. Each distillery a trail-goer visits will stamp their map after they make a purchase or take a tour, and once the trail map is fully stamped, that person is entered in a generous twice-a-year drawing. First place gets a basket of every SKU produced by the participating distilleries, while second place wins one bottle from each. After launching in November with 11 distilleries, Dubay says some people already had four or more stamps on their map by January. More distilleries are expected to join within the year, and Dubay says they anticipate seeing a lot of trail-goers during the tourist season. “Within 100 miles of the center of Connecticut, which is Hartford, there are 25 million people,” including New York City and Boston, he tells. “We’re just so well situated geographically that there’s a huge opportunity.” Thus far, guild members have taken maps to convention centers and airport kiosks around the state, and they may hire a tourism publication distribution service to ensure wider and more consistent map distribution. This year they are focusing on promoting the trail in-state, and they plan to expand into neighboring states in the future. They are also promoting the trail at events like the Eastern States Exposition, where over 500,000 people had the

chance to see their map over the course of two weeks. They also have a website and a Facebook page. In addition to the guild’s efforts, local newspaper, magazine, radio and television outlets have covered the trail. The state tourism board is also featuring it on their website, and Dubay thinks the board recognizes that the spirits trail has a strong potential to create tourism, just like the already-existing CT Wine and CT Beer trails. Dubay says the trail has also developed a partnership with a local tour company that provides van trips for the CT Beer Trail. They now offer tours featuring both breweries and distilleries, helping CT beer fans discover CT spirits, and vice versa. In addition to generating tourism, the trail also serves as common ground for strengthening the CT Spirits Guild, and a small part of the guild fee will go towards maintaining and promoting the trail. “We’re kind of in the mode of crawl, walk, run in terms of that marketing budget,” he explains. “We’re all trying to build our own brands individually, but then make sure we’ve got a little left over at least to get the trail going.” Connecticut is a small state, and Dubay says that’s a benefit since trail-goers can fill their map with stamps in several months, compared to larger states. It also helped them get up and running faster. All told, it took about three months to get the trail going. Dubay says that the rewards have definitely outweighed the effort to get it started, and he recommends other distillers consider creating their own trails, as well. “It’s pretty simple if you’re going to create