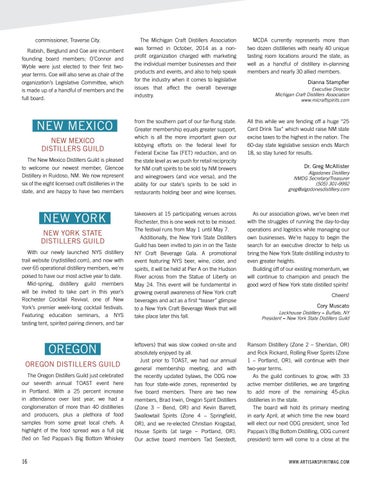 commissioner, Traverse City. Rabish, Berglund and Coe are incumbent founding board members; O’Connor and Wyble were just elected to their first twoyear terms. Coe will also serve as chair of the organization’s Legislative Committee, which is made up of a handful of members and the full board.

NEW MEXICO NEW MEXICO DISTILLERS GUILD The New Mexico Distillers Guild is pleased to welcome our newest member, Glencoe Distillery in Ruidoso, NM. We now represent six of the eight licensed craft distilleries in the state, and are happy to have two members

OREGON OREGON DISTILLERS GUILD The Oregon Distillers Guild just celebrated our seventh annual TOAST event here in Portland. With a 25 percent increase in attendance over last year, we had a conglomeration of more than 40 distilleries and producers, plus a plethora of food samples from some great local chefs. A highlight of the food spread was a full pig (fed on Ted Pappas’s Big Bottom Whiskey

The Michigan Craft Distillers Association was formed in October, 2014 as a nonprofit organization charged with marketing the individual member businesses and their products and events, and also to help speak for the industry when it comes to legislative issues that affect the overall beverage industry.

MCDA currently represents more than two dozen distilleries with nearly 40 unique tasting room locations around the state, as well as a handful of distillery in-planning members and nearly 30 allied members.

from the southern part of our far-flung state. Greater membership equals greater support, which is all the more important given our lobbying efforts on the federal level for Federal Excise Tax (FET) reduction, and on the state level as we push for retail reciprocity for NM craft spirits to be sold by NM brewers and winegrowers (and vice versa), and the ability for our state’s spirits to be sold in restaurants holding beer and wine licenses.

All this while we are fending off a huge “25 Cent Drink Tax” which would raise NM state excise taxes to the highest in the nation. The 60-day state legislative session ends March 18, so stay tuned for results.

takeovers at 15 participating venues across Rochester, this is one week not to be missed. The festival runs from May 1 until May 7. Additionally, the New York State Distillers Guild has been invited to join in on the Taste NY Craft Beverage Gala. A promotional event featuring NYS beer, wine, cider, and spirits, it will be held at Pier A on the Hudson River across from the Statue of Liberty on May 24. This event will be fundamental in growing overall awareness of New York craft beverages and act as a first “teaser” glimpse to a New York Craft Beverage Week that will take place later this fall.

As our association grows, we’ve been met with the struggles of running the day-to-day operations and logistics while managing our own businesses. We’re happy to begin the search for an executive director to help us bring the New York State distilling industry to even greater heights. Building off of our existing momentum, we will continue to champion and preach the good word of New York state distilled spirits!

leftovers) that was slow cooked on-site and absolutely enjoyed by all. Just prior to TOAST, we had our annual general membership meeting, and with the recently updated bylaws, the ODG now has four state-wide zones, represented by five board members. There are two new members, Brad Irwin, Oregon Spirit Distillers (Zone 3 – Bend, OR) and Kevin Barrett, Swallowtail Spirits (Zone 4 – Springfield, OR), and we re-elected Christian Krogstad, House Spirits (at large – Portland, OR). Our active board members Tad Seestedt,

Ransom Distillery (Zone 2 – Sheridan, OR) and Rick Rickard, Rolling River Spirits (Zone 1 – Portland, OR), will continue with their two-year terms. As the guild continues to grow, with 33 active member distilleries, we are targeting to add more of the remaining 45-plus distilleries in the state. The board will hold its primary meeting in early April, at which time the new board will elect our next ODG president, since Ted Pappas’s (Big Bottom Distilling, ODG current president) term will come to a close at the