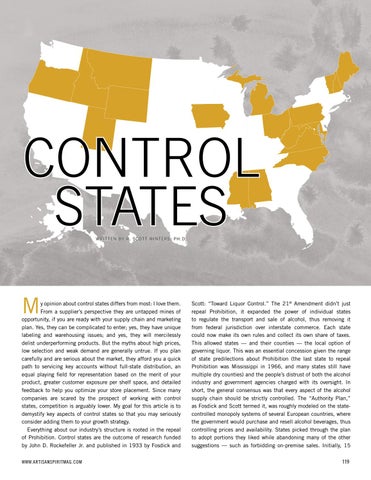 y opinion about control states differs from most: I love them. From a supplier’s perspective they are untapped mines of opportunity, if you are ready with your supply chain and marketing plan. Yes, they can be complicated to enter; yes, they have unique labeling and warehousing issues; and yes, they will mercilessly delist underperforming products. But the myths about high prices, low selection and weak demand are generally untrue. If you plan carefully and are serious about the market, they afford you a quick path to servicing key accounts without full-state distribution, an equal playing field for representation based on the merit of your product, greater customer exposure per shelf space, and detailed feedback to help you optimize your store placement. Since many companies are scared by the prospect of working with control states, competition is arguably lower. My goal for this article is to demystify key aspects of control states so that you may seriously consider adding them to your growth strategy. Everything about our industry’s structure is rooted in the repeal of Prohibition. Control states are the outcome of research funded by John D. Rockefeller Jr. and published in 1933 by Fosdick and WWW.ARTISANSPIRITMAG.COM

Scott: “Toward Liquor Control.” The 21st Amendment didn’t just repeal Prohibition, it expanded the power of individual states to regulate the transport and sale of alcohol, thus removing it from federal jurisdiction over interstate commerce. Each state could now make its own rules and collect its own share of taxes. This allowed states — and their counties — the local option of governing liquor. This was an essential concession given the range of state predilections about Prohibition (the last state to repeal Prohibition was Mississippi in 1966, and many states still have multiple dry counties) and the people’s distrust of both the alcohol industry and government agencies charged with its oversight. In short, the general consensus was that every aspect of the alcohol supply chain should be strictly controlled. The “Authority Plan,” as Fosdick and Scott termed it, was roughly modeled on the statecontrolled monopoly systems of several European countries, where the government would purchase and resell alcohol beverages, thus controlling prices and availability. States picked through the plan to adopt portions they liked while abandoning many of the other suggestions — such as forbidding on-premise sales. Initially, 15