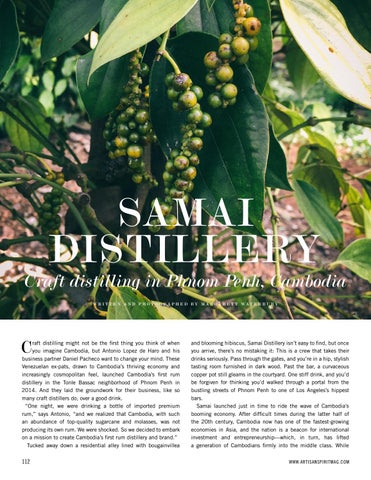 raft distilling might not be the first thing you think of when you imagine Cambodia, but Antonio Lopez de Haro and his business partner Daniel Pacheco want to change your mind. These Venezuelan ex-pats, drawn to Cambodia’s thriving economy and increasingly cosmopolitan feel, launched Cambodia’s first rum distillery in the Tonle Bassac neighborhood of Phnom Penh in 2014. And they laid the groundwork for their business, like so many craft distillers do, over a good drink. “One night, we were drinking a bottle of imported premium rum,” says Antonio, “and we realized that Cambodia, with such an abundance of top-quality sugarcane and molasses, was not producing its own rum. We were shocked. So we decided to embark on a mission to create Cambodia’s first rum distillery and brand.” Tucked away down a residential alley lined with bougainvillea

and blooming hibiscus, Samai Distillery isn’t easy to find, but once you arrive, there’s no mistaking it: This is a crew that takes their drinks seriously. Pass through the gates, and you’re in a hip, stylish tasting room furnished in dark wood. Past the bar, a curvaceous copper pot still gleams in the courtyard. One stiff drink, and you’d be forgiven for thinking you’d walked through a portal from the bustling streets of Phnom Penh to one of Los Angeles’s hippest bars. Samai launched just in time to ride the wave of Cambodia’s booming economy. After difficult times during the latter half of the 20th century, Cambodia now has one of the fastest-growing economies in Asia, and the nation is a beacon for international investment and entrepreneurship—which, in turn, has lifted a generation of Cambodians firmly into the middle class. While WWW.ARTISANSPIRITMAG.COM