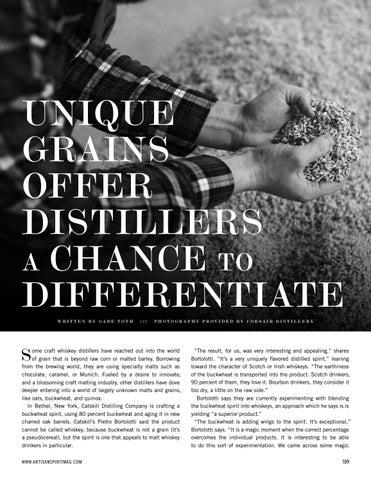 ome craft whiskey distillers have reached out into the world of grain that is beyond raw corn or malted barley. Borrowing from the brewing world, they are using specialty malts such as chocolate, caramel, or Munich. Fueled by a desire to innovate, and a blossoming craft malting industry, other distillers have dove deeper entering into a world of largely unknown malts and grains, like oats, buckwheat, and quinoa. In Bethel, New York, Catskill Distilling Company is crafting a buckwheat spirit, using 80 percent buckwheat and aging it in new charred oak barrels. Catskill’s Pietro Bortolotti said the product cannot be called whiskey, because buckwheat is not a grain (it’s a pseudocereal), but the spirit is one that appeals to malt whiskey drinkers in particular.

“The result, for us, was very interesting and appealing,” shares Bortolotti. “It’s a very uniquely flavored distilled spirit,” leaning toward the character of Scotch or Irish whiskeys. “The earthiness of the buckwheat is transported into the product. Scotch drinkers, 90 percent of them, they love it. Bourbon drinkers, they consider it too dry, a little on the raw side.” Bortolotti says they are currently experimenting with blending the buckwheat spirit into whiskeys, an approach which he says is is yielding “a superior product.” “The buckwheat is adding wings to the spirit. It’s exceptional,” Bortolotti says. “It is a magic moment when the correct percentage overcomes the individual products. It is interesting to be able to do this sort of experimentation. We came across some magic