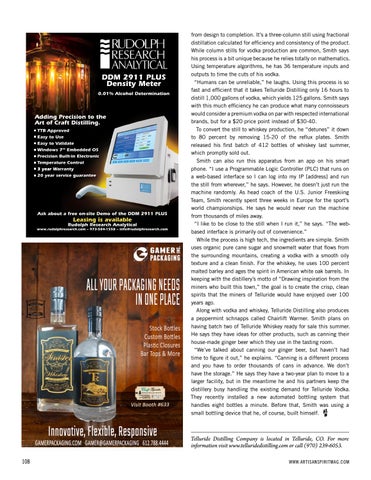 from design to completion. It’s a three-column still using fractional distillation calculated for efficiency and consistency of the product. While column stills for vodka production are common, Smith says his process is a bit unique because he relies totally on mathematics. Using temperature algorithms, he has 36 temperature inputs and outputs to time the cuts of his vodka. “Humans can be unreliable,” he laughs. Using this process is so fast and efficient that it takes Telluride Distilling only 16 hours to distill 1,000 gallons of vodka, which yields 125 gallons. Smith says with this much efficiency he can produce what many connoisseurs would consider a premium vodka on par with respected international brands, but for a $20 price point instead of $30-40. To convert the still to whiskey production, he “detunes” it down to 80 percent by removing 15-20 of the reflux plates. Smith released his first batch of 412 bottles of whiskey last summer, which promptly sold out. Smith can also run this apparatus from an app on his smart phone. “I use a Programmable Logic Controller (PLC) that runs on a web-based interface so I can log into my IP [address] and run the still from wherever,” he says. However, he doesn’t just run the machine randomly. As head coach of the U.S. Junior Freeskiing Team, Smith recently spent three weeks in Europe for the sport’s world championships. He says he would never run the machine from thousands of miles away. “I like to be close to the still when I run it,” he says. “The webbased interface is primarily out of convenience.” While the process is high tech, the ingredients are simple. Smith uses organic pure cane sugar and snowmelt water that flows from the surrounding mountains, creating a vodka with a smooth oily texture and a clean finish. For the whiskey, he uses 100 percent malted barley and ages the spirit in American white oak barrels. In keeping with the distillery’s motto of “Drawing inspiration from the miners who built this town,” the goal is to create the crisp, clean spirits that the miners of Telluride would have enjoyed over 100 years ago. Along with vodka and whiskey, Telluride Distilling also produces a peppermint schnapps called Chairlift Warmer. Smith plans on having batch two of Telluride Whiskey ready for sale this summer. He says they have ideas for other products, such as canning their house-made ginger beer which they use in the tasting room. “We’ve talked about canning our ginger beer, but haven’t had time to figure it out,” he explains. “Canning is a different process and you have to order thousands of cans in advance. We don’t have the storage.” He says they have a two-year plan to move to a larger facility, but in the meantime he and his partners keep the distillery busy handling the existing demand for Telluride Vodka. They recently installed a new automated bottling system that handles eight bottles a minute. Before that, Smith was using a small bottling device that he, of course, built himself.