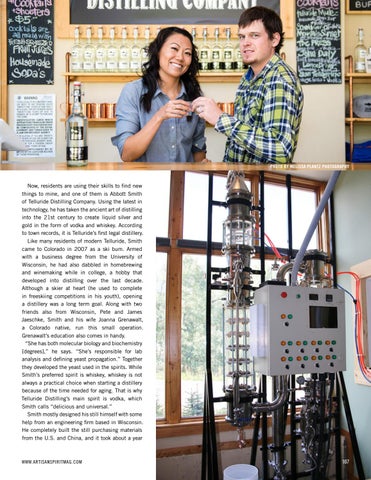 Now, residents are using their skills to find new things to mine, and one of them is Abbott Smith of Telluride Distilling Company. Using the latest in technology, he has taken the ancient art of distilling into the 21st century to create liquid silver and gold in the form of vodka and whiskey. According to town records, it is Telluride’s first legal distillery. Like many residents of modern Telluride, Smith came to Colorado in 2007 as a ski bum. Armed with a business degree from the University of Wisconsin, he had also dabbled in homebrewing and winemaking while in college, a hobby that developed into distilling over the last decade. Although a skier at heart (he used to complete in freeskiing competitions in his youth), opening a distillery was a long term goal. Along with two friends also from Wisconsin, Pete and James Jaeschke, Smith and his wife Joanna Grenawalt, a Colorado native, run this small operation. Grenawalt’s education also comes in handy. “She has both molecular biology and biochemistry [degrees],” he says. “She’s responsible for lab analysis and defining yeast propagation.” Together they developed the yeast used in the spirits. While Smith’s preferred spirit is whiskey, whiskey is not always a practical choice when starting a distillery because of the time needed for aging. That is why Telluride Distilling’s main spirit is vodka, which Smith calls “delicious and universal.” Smith mostly designed his still himself with some help from an engineering firm based in Wisconsin. He completely built the still purchasing materials from the U.S. and China, and it took about a year