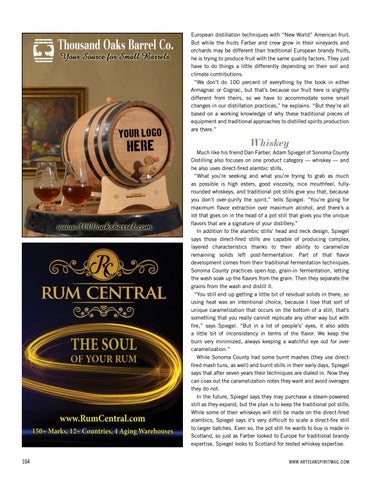 European distillation techniques with “New World” American fruit. But while the fruits Farber and crew grow in their vineyards and orchards may be different than traditional European brandy fruits, he is trying to produce fruit with the same quality factors. They just have to do things a little differently depending on their soil and climate contributions. “We don’t do 100 percent of everything by the book in either Armagnac or Cognac, but that’s because our fruit here is slightly different from theirs, so we have to accommodate some small changes in our distillation practices,” he explains. “But they’re all based on a working knowledge of why these traditional pieces of equipment and traditional approaches to distilled spirits production are there.”

Whiskey Much like his friend Dan Farber, Adam Spiegel of Sonoma County Distilling also focuses on one product category — whiskey — and he also uses direct-fired alambic stills. “What you’re seeking and what you’re trying to grab as much as possible is high esters, good viscosity, nice mouthfeel, fullyrounded whiskeys, and traditional pot stills give you that, because you don’t over-purify the spirit,” tells Spiegel. “You’re going for maximum flavor extraction over maximum alcohol, and there’s a lot that goes on in the head of a pot still that gives you the unique flavors that are a signature of your distillery.” In addition to the alambic stills’ head and neck design, Spiegel says those direct-fired stills are capable of producing complex, layered characteristics thanks to their ability to caramelize remaining solids left post-fermentation. Part of that flavor development comes from their traditional fermentation techniques. Sonoma County practices open-top, grain-in fermentation, letting the wash soak up the flavors from the grain. Then they separate the grains from the wash and distill it. “You still end up getting a little bit of residual solids in there, so using heat was an intentional choice, because I love that sort of unique caramelization that occurs on the bottom of a still, that’s something that you really cannot replicate any other way but with fire,” says Spiegel. “But in a lot of people’s’ eyes, it also adds a little bit of inconsistency in terms of the flavor. We keep the burn very minimized, always keeping a watchful eye out for overcaramelization.” While Sonoma County had some burnt mashes (they use directfired mash tuns, as well) and burnt stills in their early days, Spiegel says that after seven years their techniques are dialed in. Now they can coax out the caramelization notes they want and avoid overages they do not. In the future, Spiegel says they may purchase a steam-powered still as they expand, but the plan is to keep the traditional pot stills. While some of their whiskeys will still be made on the direct-fired alambics, Spiegel says it’s very difficult to scale a direct-fire still to larger batches. Even so, the pot still he wants to buy is made in Scotland, so just as Farber looked to Europe for traditional brandy expertise, Spiegel looks to Scotland for tested whiskey expertise.