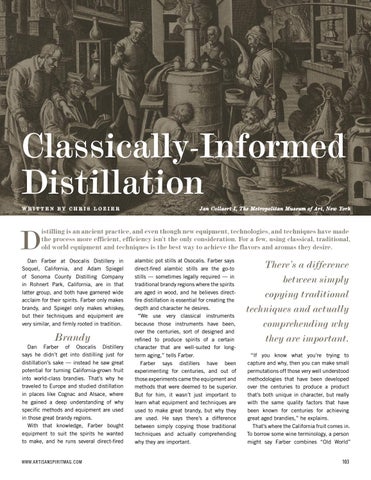 Jan Collaert I, The Metropolitan Museum of Art, New York

istilling is an ancient practice, and even though new equipment, technologies, and techniques have made the process more efficient, efficiency isn’t the only consideration. For a few, using classical, traditional, old world equipment and techniques is the best way to achieve the flavors and aromas they desire.

Dan Farber at Osocalis Distillery in Soquel, California, and Adam Spiegel of Sonoma County Distilling Company in Rohnert Park, California, are in that latter group, and both have garnered wide acclaim for their spirits. Farber only makes brandy, and Spiegel only makes whiskey, but their techniques and equipment are very similar, and firmly rooted in tradition.

Brandy Dan Farber of Osocalis Distillery says he didn’t get into distilling just for distillation’s sake — instead he saw great potential for turning California-grown fruit into world-class brandies. That’s why he traveled to Europe and studied distillation in places like Cognac and Alsace, where he gained a deep understanding of why specific methods and equipment are used in those great brandy regions. With that knowledge, Farber bought equipment to suit the spirits he wanted to make, and he runs several direct-fired WWW.ARTISANSPIRITMAG.COM

alambic pot stills at Osocalis. Farber says direct-fired alambic stills are the go-to stills — sometimes legally required — in traditional brandy regions where the spirits are aged in wood, and he believes directfire distillation is essential for creating the depth and character he desires. “We use very classical instruments because those instruments have been, over the centuries, sort of designed and refined to produce spirits of a certain character that are well-suited for longterm aging,” tells Farber. Farber says distillers have been experimenting for centuries, and out of those experiments came the equipment and methods that were deemed to be superior. But for him, it wasn’t just important to learn what equipment and techniques are used to make great brandy, but why they are used. He says there’s a difference between simply copying those traditional techniques and actually comprehending why they are important.

There’s a difference between simply copying traditional techniques and actually comprehending why they are important. “If you know what you’re trying to capture and why, then you can make small permutations off those very well understood methodologies that have been developed over the centuries to produce a product that’s both unique in character, but really with the same quality factors that have been known for centuries for achieving great aged brandies,” he explains. That’s where the California fruit comes in. To borrow some wine terminology, a person might say Farber combines “Old World”