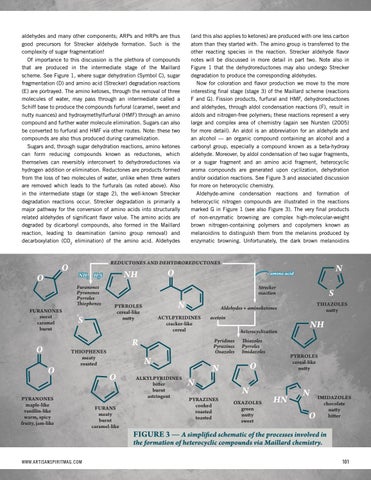 aldehydes and many other components; ARPs and HRPs are thus good precursors for Strecker aldehyde formation. Such is the complexity of sugar fragmentation! Of importance to this discussion is the plethora of compounds that are produced in the intermediate stage of the Maillard scheme. See Figure 1, where sugar dehydration (Symbol C), sugar fragmentation (D) and amino acid (Strecker) degradation reactions (E) are portrayed. The amino ketoses, through the removal of three molecules of water, may pass through an intermediate called a Schiff base to produce the compounds furfural (caramel, sweet and nutty nuances) and hydroxymethylfurfural (HMF) through an amino compound and further water molecule elimination. Sugars can also be converted to furfural and HMF via other routes. Note: these two compounds are also thus produced during caramelization. Sugars and, through sugar dehydration reactions, amino ketones can form reducing compounds known as reductones, which themselves can reversibly interconvert to dehydroreductones via hydrogen addition or elimination. Reductones are products formed from the loss of two molecules of water, unlike when three waters are removed which leads to the furfurals (as noted above). Also in the intermediate stage (or stage 2), the well-known Strecker degradation reactions occur. Strecker degradation is primarily a major pathway for the conversion of amino acids into structurally related aldehydes of significant flavor value. The amino acids are degraded by dicarbonyl compounds, also formed in the Maillard reaction, leading to deamination (amino group removal) and decarboxylation (CO2 elimination) of the amino acid. Aldehydes

(and this also applies to ketones) are produced with one less carbon atom than they started with. The amino group is transferred to the other reacting species in the reaction. Strecker aldehyde flavor notes will be discussed in more detail in part two. Note also in Figure 1 that the dehydroreductones may also undergo Strecker degradation to produce the corresponding aldehydes. Now for coloration and flavor production we move to the more interesting final stage (stage 3) of the Maillard scheme (reactions F and G). Fission products, furfural and HMF, dehydroreductones and aldehydes, through aldol condensation reactions (F), result in aldols and nitrogen-free polymers; these reactions represent a very large and complex area of chemistry (again see Nursten (2005) for more detail). An aldol is an abbreviation for an aldehyde and an alcohol — an organic compound containing an alcohol and a carbonyl group, especially a compound known as a beta-hydroxy aldehyde. Moreover, by aldol condensation of two sugar fragments, or a sugar fragment and an amino acid fragment, heterocyclic aroma compounds are generated upon cyclization, dehydration and/or oxidation reactions. See Figure 3 and associated discussion for more on heterocyclic chemistry. Aldehyde-amine condensation reactions and formation of heterocyclic nitrogen compounds are illustrated in the reactions marked G in Figure 1 (see also Figure 3). The very final products of non-enzymatic browning are complex high-molecular-weight brown nitrogen-containing polymers and copolymers known as melanoidins to distinguish them from the melanins produced by enzymatic browning. Unfortunately, the dark brown melanoidins

FIGURE 3 — A simplified schematic of the processes involved in the formation of heterocyclic compounds via Maillard chemistry. 101