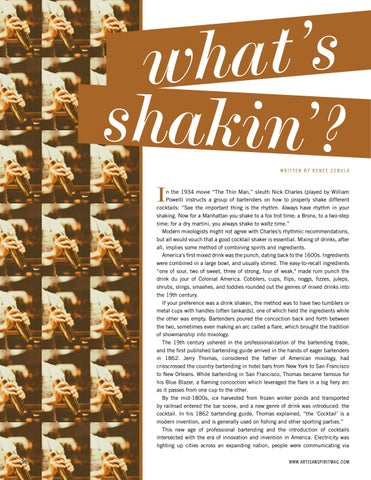 n the 1934 movie “The Thin Man,” sleuth Nick Charles (played by William Powell) instructs a group of bartenders on how to properly shake different cocktails: “See the important thing is the rhythm. Always have rhythm in your shaking. Now for a Manhattan you shake to a fox trot time; a Bronx, to a two-step time; for a dry martini, you always shake to waltz time.” Modern mixologists might not agree with Charles’s rhythmic recommendations, but all would vouch that a good cocktail shaker is essential. Mixing of drinks, after all, implies some method of combining spirits and ingredients. America’s first mixed drink was the punch, dating back to the 1600s. Ingredients were combined in a large bowl, and usually stirred. The easy-to-recall ingredients “one of sour, two of sweet, three of strong, four of weak,&quot; made rum punch the drink du jour of Colonial America. Cobblers, cups, flips, noggs, fizzes, juleps, shrubs, slings, smashes, and toddies rounded out the genres of mixed drinks into the 19th century. If your preference was a drink shaken, the method was to have two tumblers or metal cups with handles (often tankards), one of which held the ingredients while the other was empty. Bartenders poured the concoction back and forth between the two, sometimes even making an arc called a flare, which brought the tradition of showmanship into mixology. The 19th century ushered in the professionalization of the bartending trade, and the first published bartending guide arrived in the hands of eager bartenders in 1862. Jerry Thomas, considered the father of American mixology, had crisscrossed the country bartending in hotel bars from New York to San Francisco to New Orleans. While bartending in San Francisco, Thomas became famous for his Blue Blazer, a flaming concoction which leveraged the flare in a big fiery arc as it passes from one cup to the other. By the mid-1800s, ice harvested from frozen winter ponds and transported by railroad entered the bar scene, and a new genre of drink was introduced: the cocktail. In his 1862 bartending guide, Thomas explained, “the ‘Cocktail’ is a modern invention, and is generally used on fishing and other sporting parties.” This new age of professional bartending and the introduction of cocktails intersected with the era of innovation and invention in America. Electricity was lighting up cities across an expanding nation, people were communicating via