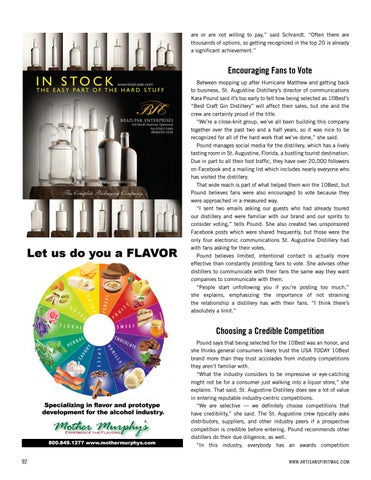 are or are not willing to pay,” said Schrandt. “Often there are thousands of options, so getting recognized in the top 20 is already a significant achievement.”

Let us do you a FLAVOR

Between mopping up after Hurricane Matthew and getting back to business, St. Augustine Distillery’s director of communications Kara Pound said it’s too early to tell how being selected as 10Best’s “Best Craft Gin Distillery” will affect their sales, but she and the crew are certainly proud of the title. “We’re a close-knit group, we’ve all been building this company together over the past two and a half years, so it was nice to be recognized for all of the hard work that we’ve done,” she said. Pound manages social media for the distillery, which has a lively tasting room in St. Augustine, Florida, a bustling tourist destination. Due in part to all their foot traffic, they have over 20,000 followers on Facebook and a mailing list which includes nearly everyone who has visited the distillery. That wide reach is part of what helped them win the 10Best, but Pound believes fans were also encouraged to vote because they were approached in a measured way. “I sent two emails asking our guests who had already toured our distillery and were familiar with our brand and our spirits to consider voting,” tells Pound. She also created two unsponsored Facebook posts which were shared frequently, but those were the only four electronic communications St. Augustine Distillery had with fans asking for their votes. Pound believes limited, intentional contact is actually more effective than constantly prodding fans to vote. She advises other distillers to communicate with their fans the same way they want companies to communicate with them. “People start unfollowing you if you’re posting too much,” she explains, emphasizing the importance of not straining the relationship a distillery has with their fans. “I think there’s absolutely a limit.”

Specializing in flavor and prototype development for the alcohol industry.

Pound says that being selected for the 10Best was an honor, and she thinks general consumers likely trust the USA TODAY 10Best brand more than they trust accolades from industry competitions they aren’t familiar with. “What the industry considers to be impressive or eye-catching might not be for a consumer just walking into a liquor store,” she explains. That said, St. Augustine Distillery does see a lot of value in entering reputable industry-centric competitions. “We are selective — we definitely choose competitions that have credibility,” she said. The St. Augustine crew typically asks distributors, suppliers, and other industry peers if a prospective competition is credible before entering. Pound recommends other distillers do their due diligence, as well. “In this industry, everybody has an awards competition WWW.ARTISANSPIRITMAG.COM