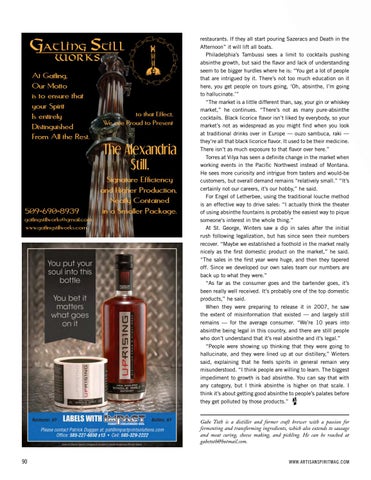 At Gatling, Our Motto is to ensure that your Spirit Is entirely Distinguished From All the Rest.

to that Effect, We are Proud to Present

restaurants. If they all start pouring Sazeracs and Death in the Afternoon” it will lift all boats. Philadelphia’s Tambussi sees a limit to cocktails pushing absinthe growth, but said the flavor and lack of understanding seem to be bigger hurdles where he is: “You get a lot of people that are intrigued by it. There’s not too much education on it here, you get people on tours going, ‘Oh, absinthe, I’m going to hallucinate.’” “The market is a little different than, say, your gin or whiskey market,” he continues. “There’s not as many pure-absinthe cocktails. Black licorice flavor isn’t liked by everybody, so your market’s not as widespread as you might find when you look at traditional drinks over in Europe — ouzo sambuca, raki — they’re all that black licorice flavor. It used to be their medicine. There isn’t as much exposure to that flavor over here.” Torres at Vilya has seen a definite change in the market when working events in the Pacific Northwest instead of Montana. He sees more curiosity and intrigue from tasters and would-be customers, but overall demand remains “relatively small.” “It’s certainly not our careers, it’s our hobby,” he said. For Engel of Letherbee, using the traditional louche method is an effective way to drive sales: “I actually think the theater of using absinthe fountains is probably the easiest way to pique someone's interest in the whole thing.” At St. George, Winters saw a dip in sales after the initial rush following legalization, but has since seen their numbers recover. “Maybe we established a foothold in the market really nicely as the first domestic product on the market,” he said. “The sales in the first year were huge, and then they tapered off. Since we developed our own sales team our numbers are back up to what they were.” “As far as the consumer goes and the bartender goes, it’s been really well received. It’s probably one of the top domestic products,” he said. When they were preparing to release it in 2007, he saw the extent of misinformation that existed — and largely still remains — for the average consumer. “We’re 10 years into absinthe being legal in this country, and there are still people who don’t understand that it’s real absinthe and it’s legal.” “People were showing up thinking that they were going to hallucinate, and they were lined up at our distillery,” Winters said, explaining that he feels spirits in general remain very misunderstood. “I think people are willing to learn. The biggest impediment to growth is bad absinthe. You can say that with any category, but I think absinthe is higher on that scale. I think it’s about getting good absinthe to people’s palates before they get polluted by those products.” Gabe Toth is a distiller and former craft brewer with a passion for fermenting and transforming ingredients, which also extends to sausage and meat curing, cheese making, and pickling. He can be reached at gabetoth@hotmail.com.