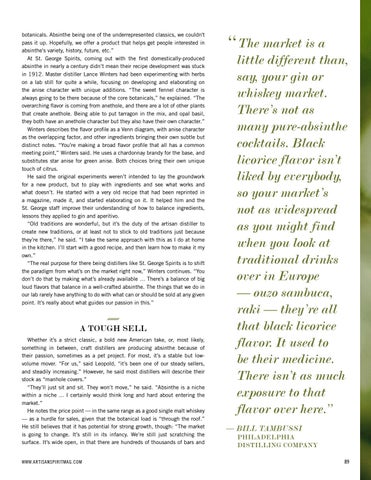 botanicals. Absinthe being one of the underrepresented classics, we couldn't pass it up. Hopefully, we offer a product that helps get people interested in absinthe's variety, history, future, etc.” At St. George Spirits, coming out with the first domestically-produced absinthe in nearly a century didn’t mean their recipe development was stuck in 1912. Master distiller Lance Winters had been experimenting with herbs on a lab still for quite a while, focusing on developing and elaborating on the anise character with unique additions. “The sweet fennel character is always going to be there because of the core botanicals,” he explained. “The overarching flavor is coming from anethole, and there are a lot of other plants that create anethole. Being able to put tarragon in the mix, and opal basil, they both have an anethole character but they also have their own character.” Winters describes the flavor profile as a Venn diagram, with anise character as the overlapping factor, and other ingredients bringing their own subtle but distinct notes. “You’re making a broad flavor profile that all has a common meeting point,” Winters said. He uses a chardonnay brandy for the base, and substitutes star anise for green anise. Both choices bring their own unique touch of citrus. He said the original experiments weren’t intended to lay the groundwork for a new product, but to play with ingredients and see what works and what doesn’t. He started with a very old recipe that had been reprinted in a magazine, made it, and started elaborating on it. It helped him and the St. George staff improve their understanding of how to balance ingredients, lessons they applied to gin and aperitivo. “Old traditions are wonderful, but it’s the duty of the artisan distiller to create new traditions, or at least not to stick to old traditions just because they’re there,” he said. “I take the same approach with this as I do at home in the kitchen. I’ll start with a good recipe, and then learn how to make it my own.” “The real purpose for there being distillers like St. George Spirits is to shift the paradigm from what’s on the market right now,” Winters continues. “You don’t do that by making what’s already available … There’s a balance of big loud flavors that balance in a well-crafted absinthe. The things that we do in our lab rarely have anything to do with what can or should be sold at any given point. It’s really about what guides our passion in this.”

A TOUGH SELL Whether it’s a strict classic, a bold new American take, or, most likely, something in between, craft distillers are producing absinthe because of their passion, sometimes as a pet project. For most, it’s a stable but lowvolume mover. “For us,” said Leopold, “it’s been one of our steady sellers, and steadily increasing.” However, he said most distillers will describe their stock as “manhole covers.” “They’ll just sit and sit. They won’t move,” he said. “Absinthe is a niche within a niche ... I certainly would think long and hard about entering the market.” He notes the price point — in the same range as a good single malt whiskey — as a hurdle for sales, given that the botanical load is “through the roof.” He still believes that it has potential for strong growth, though: “The market is going to change. It’s still in its infancy. We’re still just scratching the surface. It’s wide open, in that there are hundreds of thousands of bars and WWW.ARTISANSPIRITMAG.COM

“ The market is a

little different than, say, your gin or whiskey market. There’s not as many pure-absinthe cocktails. Black licorice flavor isn’t liked by everybody, so your market’s not as widespread as you might find when you look at traditional drinks over in Europe — ouzo sambuca, raki — they’re all that black licorice flavor. It used to be their medicine. There isn’t as much exposure to that flavor over here.”