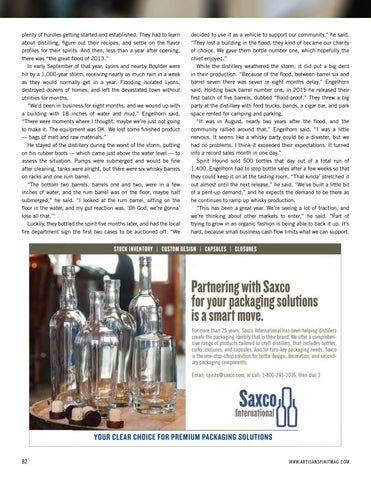 plenty of hurdles getting started and established. They had to learn about distilling, figure out their recipes, and settle on the flavor profiles for their spirits. And then, less than a year after opening, there was “the great flood of 2013.” In early September of that year, Lyons and nearby Boulder were hit by a 1,000-year storm, receiving nearly as much rain in a week as they would normally get in a year. Flooding isolated Lyons, destroyed dozens of homes, and left the devastated town without utilities for months. “We’d been in business for eight months, and we wound up with a building with 18 inches of water and mud,” Engelhorn said. “There were moments where I thought, maybe we’re just not going to make it. The equipment was OK. We lost some finished product — bags of malt and raw materials.” He stayed at the distillery during the worst of the storm, putting on his rubber boots — which came just above the water level — to assess the situation. Pumps were submerged and would be fine after cleaning, tanks were alright, but there were six whisky barrels on racks and one rum barrel. “The bottom two barrels, barrels one and two, were in a few inches of water, and the rum barrel was on the floor, maybe half submerged,” he said. “I looked at the rum barrel, sitting on the floor in the water, and my gut reaction was, ‘Oh God, we’re gonna’ lose all that.’” Luckily, they bottled the spirit five months later, and had the local fire department sign the first two cases to be auctioned off. “We

decided to use it as a vehicle to support our community,” he said. “They lost a building in the flood, they kind of became our charity of choice. We gave them bottle number one, which hopefully the chief enjoyed.” While the distillery weathered the storm, it did put a big dent in their production. “Because of the flood, between barrel six and barrel seven there was seven or eight months delay,” Engelhorn said. Holding back barrel number one, in 2015 he released their first batch of five barrels, dubbed “flood-proof.” They threw a big party at the distillery with food trucks, bands, a cigar bar, and park space rented for camping and parking. “It was in August, nearly two years after the flood, and the community rallied around that,” Engelhorn said. “I was a little nervous. It seems like a whisky party could be a disaster, but we had no problems. I think it exceeded their expectations. It turned into a record sales month in one day.” Spirit Hound sold 500 bottles that day out of a total run of 1,400. Engelhorn had to stop bottle sales after a few weeks so that they could keep it on at the tasting room. “That kinda’ stretched it out almost until the next release,” he said. “We’ve built a little bit of a pent-up demand,” and he expects the demand to be there as he continues to ramp up whisky production. “This has been a great year. We’re seeing a lot of traction, and we’re thinking about other markets to enter,” he said. “Part of trying to grow in an organic fashion is being able to back it up. It’s hard, because small business cash flow limits what we can support.