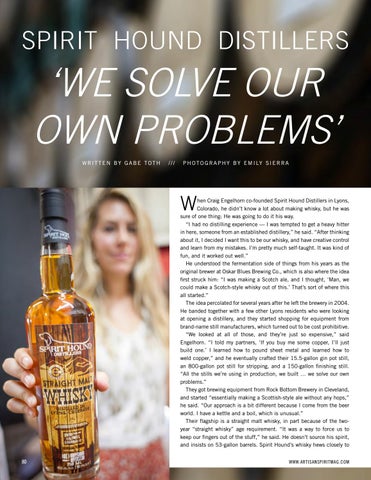 ‘WE SOLVE OUR OWN PROBLEMS’ WRITTEN BY GABE TOTH

hen Craig Engelhorn co-founded Spirit Hound Distillers in Lyons, Colorado, he didn’t know a lot about making whisky, but he was sure of one thing: He was going to do it his way. “I had no distilling experience — I was tempted to get a heavy hitter in here, someone from an established distillery,” he said. “After thinking about it, I decided I want this to be our whisky, and have creative control and learn from my mistakes. I’m pretty much self-taught. It was kind of fun, and it worked out well.” He understood the fermentation side of things from his years as the original brewer at Oskar Blues Brewing Co., which is also where the idea first struck him: “I was making a Scotch ale, and I thought, ‘Man, we could make a Scotch-style whisky out of this.’ That’s sort of where this all started.” The idea percolated for several years after he left the brewery in 2004. He banded together with a few other Lyons residents who were looking at opening a distillery, and they started shopping for equipment from brand-name still manufacturers, which turned out to be cost prohibitive. “We looked at all of those, and they’re just so expensive,” said Engelhorn. “I told my partners, ‘If you buy me some copper, I’ll just build one.’ I learned how to pound sheet metal and learned how to weld copper,” and he eventually crafted their 15.5-gallon gin pot still, an 800-gallon pot still for stripping, and a 150-gallon finishing still. “All the stills we’re using in production, we built … we solve our own problems.” They got brewing equipment from Rock Bottom Brewery in Cleveland, and started “essentially making a Scottish-style ale without any hops,” he said. “Our approach is a bit different because I come from the beer world. I have a kettle and a boil, which is unusual.” Their flagship is a straight malt whisky, in part because of the twoyear “straight whisky” age requirement. “It was a way to force us to keep our fingers out of the stuff,” he said. He doesn’t source his spirit, and insists on 53-gallon barrels. Spirit Hound’s whisky hews closely to