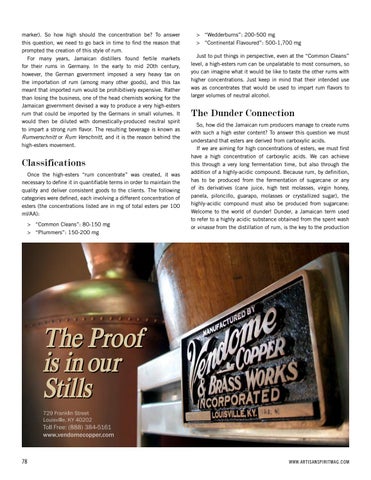 marker). So how high should the concentration be? To answer this question, we need to go back in time to find the reason that prompted the creation of this style of rum. For many years, Jamaican distillers found fertile markets for their rums in Germany. In the early to mid 20th century, however, the German government imposed a very heavy tax on the importation of rum (among many other goods), and this tax meant that imported rum would be prohibitively expensive. Rather than losing the business, one of the head chemists working for the Jamaican government devised a way to produce a very high-esters rum that could be imported by the Germans in small volumes. It would then be diluted with domestically-produced neutral spirit to impart a strong rum flavor. The resulting beverage is known as Rumverschnitt or Rum Verschnitt, and it is the reason behind the high-esters movement.

Classifications Once the high-esters “rum concentrate” was created, it was necessary to define it in quantifiable terms in order to maintain the quality and deliver consistent goods to the clients. The following categories were defined, each involving a different concentration of esters (the concentrations listed are in mg of total esters per 100 ml/AA): >> “Common Cleans”: 80-150 mg >> “Plummers”: 150-200 mg

>> “Wedderburns”: 200-500 mg >> “Continental Flavoured”: 500-1,700 mg Just to put things in perspective, even at the “Common Cleans” level, a high-esters rum can be unpalatable to most consumers, so you can imagine what it would be like to taste the other rums with higher concentrations. Just keep in mind that their intended use was as concentrates that would be used to impart rum flavors to larger volumes of neutral alcohol.

The Dunder Connection So, how did the Jamaican rum producers manage to create rums with such a high ester content? To answer this question we must understand that esters are derived from carboxylic acids. If we are aiming for high concentrations of esters, we must first have a high concentration of carboxylic acids. We can achieve this through a very long fermentation time, but also through the addition of a highly-acidic compound. Because rum, by definition, has to be produced from the fermentation of sugarcane or any of its derivatives (cane juice, high test molasses, virgin honey, panela, piloncillo, guarapo, molasses or crystallized sugar), the highly-acidic compound must also be produced from sugarcane: Welcome to the world of dunder! Dunder, a Jamaican term used to refer to a highly acidic substance obtained from the spent wash or vinasse from the distillation of rum, is the key to the production