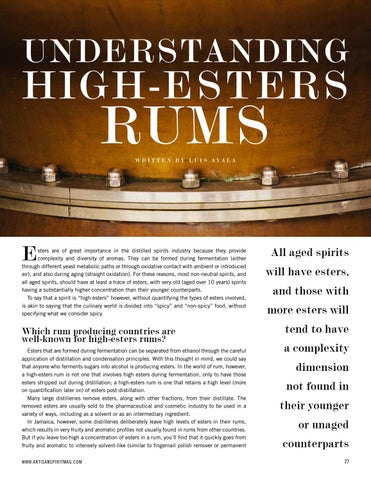 sters are of great importance in the distilled spirits industry because they provide complexity and diversity of aromas. They can be formed during fermentation (either through different yeast metabolic paths or through oxidative contact with ambient or introduced air), and also during aging (straight oxidation). For these reasons, most non-neutral spirits, and all aged spirits, should have at least a trace of esters, with very old (aged over 10 years) spirits having a substantially higher concentration than their younger counterparts. To say that a spirit is “high esters” however, without quantifying the types of esters involved, is akin to saying that the culinary world is divided into “spicy” and “non-spicy” food, without specifying what we consider spicy.

Which rum producing countries are well-known for high-esters rums? Esters that are formed during fermentation can be separated from ethanol through the careful application of distillation and condensation principles. With this thought in mind, we could say that anyone who ferments sugars into alcohol is producing esters. In the world of rum, however, a high-esters rum is not one that involves high esters during fermentation, only to have those esters stripped out during distillation; a high-esters rum is one that retains a high level (more on quantification later on) of esters post-distillation. Many large distilleries remove esters, along with other fractions, from their distillate. The removed esters are usually sold to the pharmaceutical and cosmetic industry to be used in a variety of ways, including as a solvent or as an intermediary ingredient. In Jamaica, however, some distilleries deliberately leave high levels of esters in their rums, which results in very fruity and aromatic profiles not usually found in rums from other countries. But if you leave too high a concentration of esters in a rum, you’ll find that it quickly goes from fruity and aromatic to intensely solvent-like (similar to fingernail polish remover or permanent WWW.ARTISANSPIRITMAG.COM

All aged spirits will have esters, and those with more esters will tend to have a complexity dimension not found in their younger or unaged counterparts 77