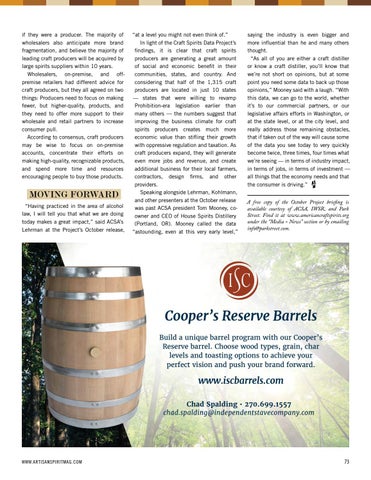 if they were a producer. The majority of wholesalers also anticipate more brand fragmentation, and believe the majority of leading craft producers will be acquired by large spirits suppliers within 10 years. Wholesalers, on-premise, and offpremise retailers had different advice for craft producers, but they all agreed on two things: Producers need to focus on making fewer, but higher-quality, products, and they need to offer more support to their wholesale and retail partners to increase consumer pull. According to consensus, craft producers may be wise to focus on on-premise accounts, concentrate their efforts on making high-quality, recognizable products, and spend more time and resources encouraging people to buy those products.

MOVING FORWARD “Having practiced in the area of alcohol law, I will tell you that what we are doing today makes a great impact,” said ACSA’s Lehrman at the Project’s October release,

“at a level you might not even think of.” In light of the Craft Spirits Data Project’s findings, it is clear that craft spirits producers are generating a great amount of social and economic benefit in their communities, states, and country. And considering that half of the 1,315 craft producers are located in just 10 states — states that were willing to revamp Prohibition-era legislation earlier than many others — the numbers suggest that improving the business climate for craft spirits producers creates much more economic value than stifling their growth with oppressive regulation and taxation. As craft producers expand, they will generate even more jobs and revenue, and create additional business for their local farmers, contractors, design firms, and other providers. Speaking alongside Lehrman, Kohlmann, and other presenters at the October release was past ACSA president Tom Mooney, coowner and CEO of House Spirits Distillery (Portland, OR). Mooney called the data “astounding, even at this very early level,”

saying the industry is even bigger and more influential than he and many others thought. “As all of you are either a craft distiller or know a craft distiller, you’ll know that we’re not short on opinions, but at some point you need some data to back up those opinions,” Mooney said with a laugh. “With this data, we can go to the world, whether it’s to our commercial partners, or our legislative affairs efforts in Washington, or at the state level, or at the city level, and really address those remaining obstacles, that if taken out of the way will cause some of the data you see today to very quickly become twice, three times, four times what we’re seeing — in terms of industry impact, in terms of jobs, in terms of investment — all things that the economy needs and that the consumer is driving.” A free copy of the October Project briefing is available courtesy of ACSA, IWSR, and Park Street. Find it at www.americancraftspirits.org under the “Media - News” section or by emailing info@parkstreet.com.