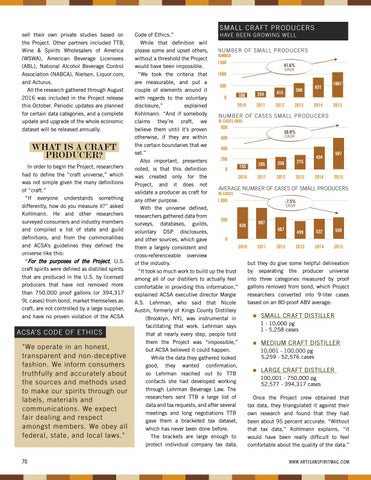 sell their own private studies based on the Project. Other partners included TTB, Wine & Spirits Wholesalers of America (WSWA), American Beverage Licensees (ABL), National Alcohol Beverage Control Association (NABCA), Nielsen, Liquor.com, and Acturus. All the research gathered through August 2016 was included in the Project release this October. Periodic updates are planned for certain data categories, and a complete update and upgrade of the whole economic dataset will be released annually.

WHAT IS A CRAFT PRODUCER? In order to begin the Project, researchers had to define the “craft universe,” which was not simple given the many definitions of “craft.” “If everyone understands something differently, how do you measure it?” asked Kohlmann. He and other researchers surveyed consumers and industry members and compiled a list of state and guild definitions, and from the commonalities and ACSA’s guidelines they defined the universe like this: “For the purposes of the Project, U.S. craft spirits were defined as distilled spirits that are produced in the U.S. by licensed producers that have not removed more than 750,000 proof gallons (or 394,317 9L cases) from bond, market themselves as craft, are not controlled by a large supplier, and have no proven violation of the ACSA

ACSA’S CODE OF ETHICS "We operate in an honest, transparent and non-deceptive fashion. We inform consumers truthfully and accurately about the sources and methods used to make our spirits through our labels, materials and communications. We expect fair dealing and respect amongst members. We obey all federal, state, and local laws."

Code of Ethics.” HAVE BEEN GROWING WELL While that definition will NUMBER OF SMALL PRODUCERS please some and upset others, NUMBER without a threshold the Project 1500 41.6% would have been impossible. CAGR 1000 “We took the criteria that are measurable, and put a 1067 500 831 598 couple of elements around it 415 254 188 0 with regards to the voluntary 2010 2011 2012 2013 2014 2015 disclosure,” explained Kohlmann. “And if somebody NUMBER OF CASES SMALL PRODUCERS 9L CASES (000) claims they’re craft, we 800 believe them until it’s proven 30.9% CAGR otherwise, if they are within 600 the certain boundaries that we 400 set.” 597 434 200 Also important, presenters 275 236 205 155 noted, is that this definition 0 was created only for the 2010 2011 2012 2013 2014 2015 Project, and it does not AVERAGE NUMBER OF CASES OF SMALL PRODUCERS validate a producer as craft for 9L CASES any other purpose. 1,000 -7.5% CAGR With the universe defined, researchers gathered data from 500 807 surveys, databases, guilds, 826 567 559 522 voluntary DSP disclosures, 459 0 and other sources, which gave 2010 2011 2012 2013 2014 2015 them a largely consistent and cross-referenceable overview but they do give some helpful delineation of the industry. by separating the producer universe “It took so much work to build up the trust into three categories measured by proof among all of our distillers to actually feel gallons removed from bond, which Project comfortable in providing this information,” researchers converted into 9-liter cases explained ACSA executive director Margie based on an 80-proof ABV average: A.S. Lehrman, who said that Nicole Austin, formerly of Kings County Distillery     SMALL CRAFT DISTILLER (Brooklyn, NY), was instrumental in 1 - 10,000 pg facilitating that work. Lehrman says 1 - 5,258 cases that at nearly every step, people told them the Project was “impossible,”     MEDIUM CRAFT DISTILLER but ACSA believed it could happen. 10,001 - 100,000 pg 5,259 - 52,576 cases While the data they gathered looked good, they wanted confirmation, so Lehrman reached out to TTB contacts she had developed working through Lehrman Beverage Law. The researchers sent TTB a large list of data and tax requests, and after several meetings and long negotiations TTB gave them a bracketed tax dataset, which has never been done before. The brackets are large enough to protect individual company tax data,

Once the Project crew obtained that tax data, they triangulated it against their own research and found that they had been about 95 percent accurate. “Without that tax data,” Kohlmann explains, “it would have been really difficult to feel comfortable about the quality of the data.” WWW.ARTISANSPIRITMAG.COM