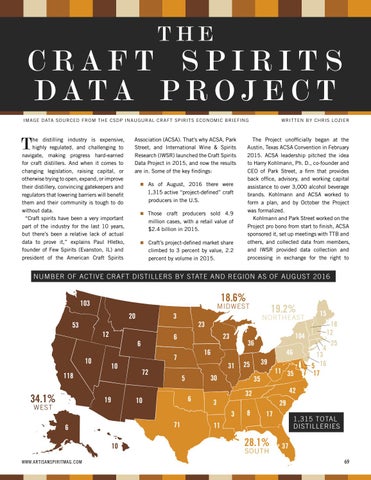 he distilling industry is expensive, highly regulated, and challenging to navigate, making progress hard-earned for craft distillers. And when it comes to changing legislation, raising capital, or otherwise trying to open, expand, or improve their distillery, convincing gatekeepers and regulators that lowering barriers will benefit them and their community is tough to do without data. “Craft spirits have been a very important part of the industry for the last 10 years, but there’s been a relative lack of actual data to prove it,” explains Paul Hletko, founder of Few Spirits (Evanston, IL) and president of the American Craft Spirits

Association (ACSA). That’s why ACSA, Park Street, and International Wine &amp; Spirits Research (IWSR) launched the Craft Spirits Data Project in 2015, and now the results are in. Some of the key findings:

The Project unofficially began at the Austin, Texas ACSA Convention in February 2015. ACSA leadership pitched the idea to Harry Kohlmann, Ph. D., co-founder and CEO of Park Street, a firm that provides back office, advisory, and working capital assistance to over 3,000 alcohol beverage brands. Kohlmann and ACSA worked to form a plan, and by October the Project was formalized. Kohlmann and Park Street worked on the Project pro bono from start to finish, ACSA sponsored it, set up meetings with TTB and others, and collected data from members, and IWSR provided data collection and processing in exchange for the right to

million cases, with a retail value of $2.4 billion in 2015. Craft’s project-defined market share