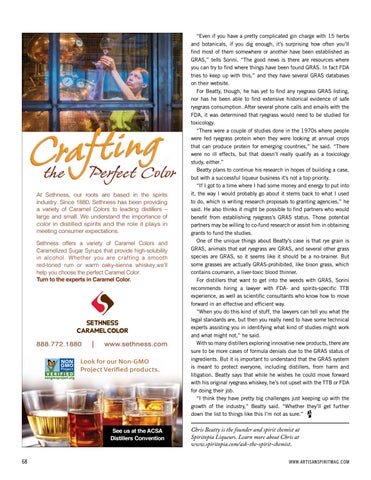 At Sethness, our roots are based in the spirits industry. Since 1880, Sethness has been providing a variety of Caramel Colors to leading distillers – large and small. We understand the importance of color in distilled spirits and the role it plays in meeting consumer expectations. Sethness offers a variety of Caramel Colors and Caramelized Sugar Syrups that provide high-solubility in alcohol. Whether you are crafting a smooth red-toned rum or warm oaky-sienna whiskey,we’ll help you choose the perfect Caramel Color. Turn to the experts in Caramel Color.

See us at the ACSA Distillers Convention

“Even if you have a pretty complicated gin charge with 15 herbs and botanicals, if you dig enough, it’s surprising how often you’ll find most of them somewhere or another have been established as GRAS,” tells Sorini. “The good news is there are resources where you can try to find where things have been found GRAS. In fact FDA tries to keep up with this,” and they have several GRAS databases on their website. For Beatty, though, he has yet to find any ryegrass GRAS listing, nor has he been able to find extensive historical evidence of safe ryegrass consumption. After several phone calls and emails with the FDA, it was determined that ryegrass would need to be studied for toxicology. “There were a couple of studies done in the 1970s where people were fed ryegrass protein when they were looking at annual crops that can produce protein for emerging countries,” he said. “There were no ill effects, but that doesn’t really qualify as a toxicology study, either.” Beatty plans to continue his research in hopes of building a case, but with a successful liqueur business it’s not a top priority. “If I got to a time where I had some money and energy to put into it, the way I would probably go about it stems back to what I used to do, which is writing research proposals to granting agencies,” he said. He also thinks it might be possible to find partners who would benefit from establishing ryegrass’s GRAS status. Those potential partners may be willing to co-fund research or assist him in obtaining grants to fund the studies. One of the unique things about Beatty’s case is that rye grain is GRAS, animals that eat ryegrass are GRAS, and several other grass species are GRAS, so it seems like it should be a no-brainer. But some grasses are actually GRAS-prohibited, like bison grass, which contains coumarin, a liver-toxic blood thinner. For distillers that want to get into the weeds with GRAS, Sorini recommends hiring a lawyer with FDA- and spirits-specific TTB experience, as well as scientific consultants who know how to move forward in an effective and efficient way. “When you do this kind of stuff, the lawyers can tell you what the legal standards are, but then you really need to have some technical experts assisting you in identifying what kind of studies might work and what might not,” he said. With so many distillers exploring innovative new products, there are sure to be more cases of formula denials due to the GRAS status of ingredients. But it is important to understand that the GRAS system is meant to protect everyone, including distillers, from harm and litigation. Beatty says that while he wishes he could move forward with his original ryegrass whiskey, he’s not upset with the TTB or FDA for doing their job. “I think they have pretty big challenges just keeping up with the growth of the industry,” Beatty said. “Whether they’ll get further down the list to things like this I’m not as sure.”

Chris Beatty is the founder and spirit chemist at Spiritopia Liqueurs. Learn more about Chris at www.spiritopia.com/ask-the-spirit-chemist. WWW.ARTISANSPIRITMAG.COM