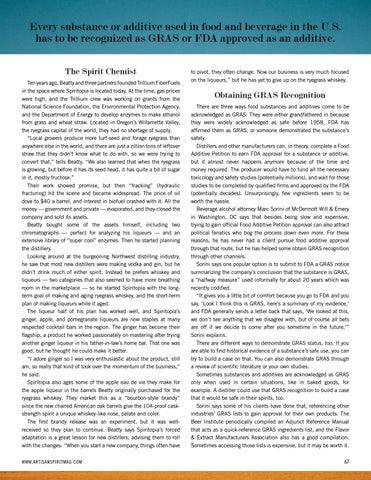 Every substance or additive used in food and beverage in the U.S. has to be recognized as GRAS or FDA approved as an additive. The Spirit Chemist Ten years ago, Beatty and three partners founded Trillium FiberFuels in the space where Spiritopia is located today. At the time, gas prices were high, and the Trillium crew was working on grants from the National Science Foundation, the Environmental Protection Agency, and the Department of Energy to develop enzymes to make ethanol from grass and wheat straw. Located in Oregon’s Willamette Valley, the ryegrass capital of the world, they had no shortage of supply. “Local growers produce more turf-seed and forage ryegrass than anywhere else in the world, and there are just a zillion tons of leftover straw that they didn’t know what to do with, so we were trying to convert that,” tells Beatty. “We also learned that when the ryegrass is growing, but before it has its seed head, it has quite a bit of sugar in it, mostly fructose.” Their work showed promise, but then “fracking” (hydraulic fracturing) hit the scene and became widespread. The price of oil dove to $40 a barrel, and interest in biofuel crashed with it. All the money — government and private — evaporated, and they closed the company and sold its assets. Beatty bought some of the assets himself, including two chromatographs — perfect for analyzing his liqueurs — and an extensive library of “super cool” enzymes. Then he started planning the distillery. Looking around at the burgeoning Northwest distilling industry, he saw that most new distillers were making vodka and gin, but he didn’t drink much of either spirit. Instead he prefers whiskey and liqueurs — two categories that also seemed to have more breathing room in the marketplace — so he started Spiritopia with the longterm goal of making and aging ryegrass whiskey, and the short-term plan of making liqueurs while it aged. The liqueur half of his plan has worked well, and Spiritopia’s ginger, apple, and pomegranate liqueurs are now staples at many respected cocktail bars in the region. The ginger has become their flagship, a product he worked passionately on mastering after trying another ginger liqueur in his father-in-law’s home bar. That one was good, but he thought he could make it better. “I adore ginger so I was very enthusiastic about the product, still am, so really that kind of took over the momentum of the business,” he said. Spiritopia also ages some of the apple eau de vie they make for the apple liqueur in the barrels Beatty originally purchased for the ryegrass whiskey. They market this as a “bourbon-style brandy” since the new charred American oak barrels give the 104-proof caskstrength spirit a unique whiskey-like nose, palate and color. The first brandy release was an experiment, but it was wellreceived so they plan to continue. Beatty says Spiritopia’s forced adaptation is a great lesson for new distillers, advising them to roll with the changes: “When you start a new company, things often have WWW.ARTISANSPIRITMAG.COM

to pivot, they often change. Now our business is very much focused on the liqueurs,” but he has yet to give up on the ryegrass whiskey.

Obtaining GRAS Recognition There are three ways food substances and additives come to be acknowledged as GRAS: They were either grandfathered in because they were widely acknowledged as safe before 1958, FDA has affirmed them as GRAS, or someone demonstrated the substance’s safety. Distillers and other manufacturers can, in theory, complete a Food Additive Petition to earn FDA approval for a substance or additive, but it almost never happens anymore because of the time and money required. The producer would have to fund all the necessary toxicology and safety studies (potentially millions), and wait for those studies to be completed by qualified firms and approved by the FDA (potentially decades). Unsurprisingly, few ingredients seem to be worth the hassle. Beverage alcohol attorney Marc Sorini of McDermott Will & Emery in Washington, DC says that besides being slow and expensive, trying to gain official Food Additive Petition approval can also attract political fanatics who bog the process down even more. For these reasons, he has never had a client pursue food additive approval through that route, but he has helped some obtain GRAS recognition through other channels. Sorini says one popular option is to submit to FDA a GRAS notice summarizing the company’s conclusion that the substance is GRAS, a “halfway measure” used informally for about 20 years which was recently codified. “It gives you a little bit of comfort because you go to FDA and you say, ‘Look I think this is GRAS, here’s a summary of my evidence,’ and FDA generally sends a letter back that says, ‘We looked at this, we don’t see anything that we disagree with, but of course all bets are off if we decide to come after you sometime in the future,’” Sorini explains. There are different ways to demonstrate GRAS status, too. If you are able to find historical evidence of a substance’s safe use, you can try to build a case on that. You can also demonstrate GRAS through a review of scientific literature or your own studies. Sometimes substances and additives are acknowledged as GRAS only when used in certain situations, like in baked goods, for example. A distiller could use that GRAS recognition to build a case that it would be safe in their spirits, too. Sorini says some of his clients have done that, referencing other industries’ GRAS lists to gain approval for their own products. The Beer Institute periodically compiled an Adjunct Reference Manual that acts as a quick-reference GRAS ingredients list, and the Flavor & Extract Manufacturers Association also has a good compilation. Sometimes accessing those lists is expensive, but it may be worth it.