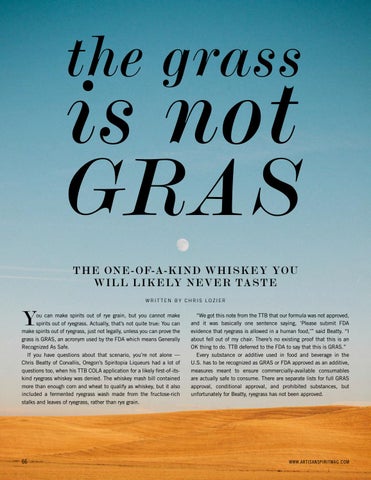 ou can make spirits out of rye grain, but you cannot make spirits out of ryegrass. Actually, that’s not quite true: You can make spirits out of ryegrass, just not legally, unless you can prove the grass is GRAS, an acronym used by the FDA which means Generally Recognized As Safe. If you have questions about that scenario, you’re not alone — Chris Beatty of Corvallis, Oregon’s Spiritopia Liqueurs had a lot of questions too, when his TTB COLA application for a likely first-of-itskind ryegrass whiskey was denied. The whiskey mash bill contained more than enough corn and wheat to qualify as whiskey, but it also included a fermented ryegrass wash made from the fructose-rich stalks and leaves of ryegrass, rather than rye grain.

“We got this note from the TTB that our formula was not approved, and it was basically one sentence saying, ‘Please submit FDA evidence that ryegrass is allowed in a human food,’” said Beatty. “I about fell out of my chair. There’s no existing proof that this is an OK thing to do. TTB deferred to the FDA to say that this is GRAS.” Every substance or additive used in food and beverage in the U.S. has to be recognized as GRAS or FDA approved as an additive, measures meant to ensure commercially-available consumables are actually safe to consume. There are separate lists for full GRAS approval, conditional approval, and prohibited substances, but unfortunately for Beatty, ryegrass has not been approved.