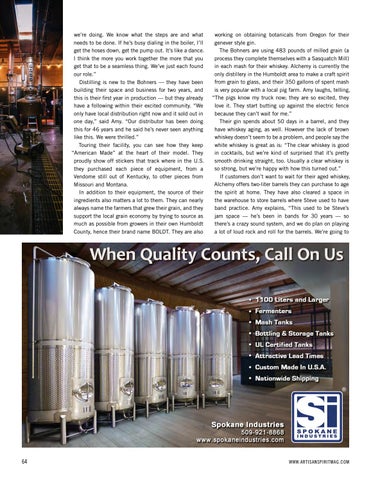 we’re doing. We know what the steps are and what needs to be done. If he’s busy dialing in the boiler, I’ll get the hoses down, get the pump out. It’s like a dance. I think the more you work together the more that you get that to be a seamless thing. We’ve just each found our role.” Distilling is new to the Bohners — they have been building their space and business for two years, and this is their first year in production — but they already have a following within their excited community. “We only have local distribution right now and it sold out in one day,” said Amy. “Our distributor has been doing this for 46 years and he said he’s never seen anything like this. We were thrilled.” Touring their facility, you can see how they keep “American Made” at the heart of their model. They proudly show off stickers that track where in the U.S. they purchased each piece of equipment, from a Vendome still out of Kentucky, to other pieces from Missouri and Montana. In addition to their equipment, the source of their ingredients also matters a lot to them. They can nearly always name the farmers that grew their grain, and they support the local grain economy by trying to source as much as possible from growers in their own Humboldt County, hence their brand name BOLDT. They are also

working on obtaining botanicals from Oregon for their genever style gin. The Bohners are using 483 pounds of milled grain (a process they complete themselves with a Sasquatch Mill) in each mash for their whiskey. Alchemy is currently the only distillery in the Humboldt area to make a craft spirit from grain to glass, and their 350 gallons of spent mash is very popular with a local pig farm. Amy laughs, telling, “The pigs know my truck now; they are so excited, they love it. They start butting up against the electric fence because they can’t wait for me.” Their gin spends about 50 days in a barrel, and they have whiskey aging, as well. However the lack of brown whiskey doesn’t seem to be a problem, and people say the white whiskey is great as is: “The clear whiskey is good in cocktails, but we’re kind of surprised that it’s pretty smooth drinking straight, too. Usually a clear whiskey is so strong, but we’re happy with how this turned out.” If customers don’t want to wait for their aged whiskey, Alchemy offers two-liter barrels they can purchase to age the spirit at home. They have also cleared a space in the warehouse to store barrels where Steve used to have band practice. Amy explains, “This used to be Steve’s jam space — he’s been in bands for 30 years — so there’s a crazy sound system, and we do plan on playing a lot of loud rock and roll for the barrels. We’re going to