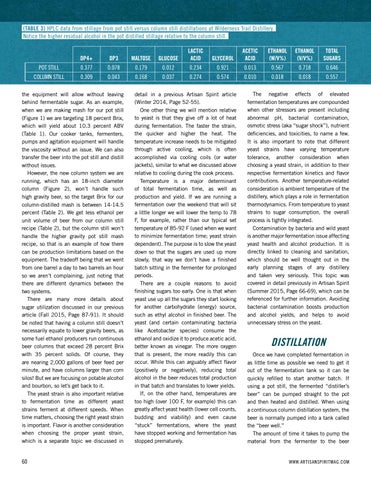 the equipment will allow without leaving behind fermentable sugar. As an example, when we are making mash for our pot still (Figure 1) we are targeting 18 percent Brix, which will yield about 10.3 percent ABV (Table 1). Our cooker tanks, fermenters, pumps and agitation equipment will handle the viscosity without an issue. We can also transfer the beer into the pot still and distill without issues. However, the new column system we are running, which has an 18-inch diameter column (Figure 2), won’t handle such high gravity beer, so the target Brix for our column-distilled mash is between 14-14.5 percent (Table 2). We get less ethanol per unit volume of beer from our column still recipe (Table 2), but the column still won’t handle the higher gravity pot still mash recipe, so that is an example of how there can be production limitations based on the equipment. The tradeoff being that we went from one barrel a day to two barrels an hour so we aren’t complaining, just noting that there are different dynamics between the two systems. There are many more details about sugar utilization discussed in our previous article (Fall 2015, Page 87-91). It should be noted that having a column still doesn’t necessarily equate to lower gravity beers, as some fuel ethanol producers run continuous beer columns that exceed 28 percent Brix with 35 percent solids. Of course, they are nearing 2,000 gallons of beer feed per minute, and have columns larger than corn silos! But we are focusing on potable alcohol and bourbon, so let’s get back to it. The yeast strain is also important relative to fermentation time as different yeast strains ferment at different speeds. When time matters, choosing the right yeast strain is important. Flavor is another consideration when choosing the proper yeast strain, which is a separate topic we discussed in

detail in a previous Artisan Spirit article (Winter 2014, Page 52-55). One other thing we will mention relative to yeast is that they give off a lot of heat during fermentation. The faster the strain, the quicker and higher the heat. The temperature increase needs to be mitigated through active cooling, which is often accomplished via cooling coils (or water jackets), similar to what we discussed above relative to cooling during the cook process. Temperature is a major determinant of total fermentation time, as well as production and yield. If we are running a fermentation over the weekend that will sit a little longer we will lower the temp to 78 F, for example, rather than our typical set temperature of 85-92 F (used when we want to minimize fermentation time; yeast strain dependent). The purpose is to slow the yeast down so that the sugars are used up more slowly, that way we don’t have a finished batch sitting in the fermenter for prolonged periods. There are a couple reasons to avoid finishing sugars too early. One is that when yeast use up all the sugars they start looking for another carbohydrate (energy) source, such as ethyl alcohol in finished beer. The yeast (and certain contaminating bacteria like Acetobacter species) consume the ethanol and oxidize it to produce acetic acid, better known as vinegar. The more oxygen that is present, the more readily this can occur. While this can arguably affect flavor (positively or negatively), reducing total alcohol in the beer reduces total production in that batch and translates to lower yields. If, on the other hand, temperatures are too high (over 100 F, for example) this can greatly affect yeast health (lower cell counts, budding and viability) and even cause “stuck” fermentations, where the yeast have stopped working and fermentation has stopped prematurely.

The negative effects of elevated fermentation temperatures are compounded when other stressors are present including abnormal pH, bacterial contamination, osmotic stress (aka “sugar shock”), nutrient deficiencies, and toxicities, to name a few. It is also important to note that different yeast strains have varying temperature tolerance, another consideration when choosing a yeast strain, in addition to their respective fermentation kinetics and flavor contributions. Another temperature-related consideration is ambient temperature of the distillery, which plays a role in fermentation thermodynamics. From temperature to yeast strains to sugar consumption, the overall process is tightly integrated. Contamination by bacteria and wild yeast is another major fermentation issue affecting yeast health and alcohol production. It is directly linked to cleaning and sanitation, which should be well thought out in the early planning stages of any distillery and taken very seriously. This topic was covered in detail previously in Artisan Spirit (Summer 2015, Page 66-69), which can be referenced for further information. Avoiding bacterial contamination boosts production and alcohol yields, and helps to avoid unnecessary stress on the yeast.

DISTILLATION Once we have completed fermentation in as little time as possible we need to get it out of the fermentation tank so it can be quickly refilled to start another batch. If using a pot still, the fermented “distiller’s beer” can be pumped straight to the pot and then heated and distilled. When using a continuous column distillation system, the beer is normally pumped into a tank called the “beer well.” The amount of time it takes to pump the material from the fermenter to the beer