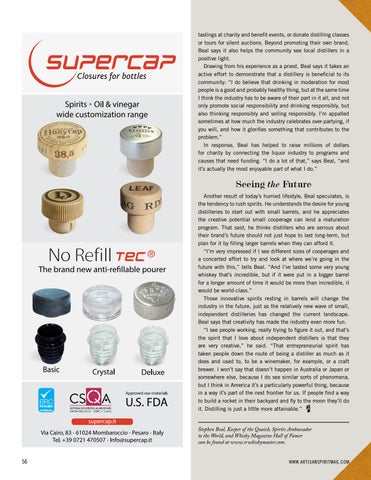 tastings at charity and benefit events, or donate distilling classes or tours for silent auctions. Beyond promoting their own brand, Beal says it also helps the community see local distillers in a positive light. Drawing from his experience as a priest, Beal says it takes an active effort to demonstrate that a distillery is beneficial to its community: “I do believe that drinking in moderation for most people is a good and probably healthy thing, but at the same time I think the industry has to be aware of their part in it all, and not only promote social responsibility and drinking responsibly, but also thinking responsibly and selling responsibly. I’m appalled sometimes at how much the industry celebrates over-partying, if you will, and how it glorifies something that contributes to the problem.” In response, Beal has helped to raise millions of dollars for charity by connecting the liquor industry to programs and causes that need funding. “I do a lot of that,” says Beal, “and it’s actually the most enjoyable part of what I do.”

Seeing the Future Another result of today’s hurried lifestyle, Beal speculates, is the tendency to rush spirits. He understands the desire for young distilleries to start out with small barrels, and he appreciates the creative potential small cooperage can lend a maturation program. That said, he thinks distillers who are serious about their brand’s future should not just hope to last long-term, but plan for it by filling larger barrels when they can afford it. “I’m very impressed if I see different sizes of cooperages and a concerted effort to try and look at where we’re going in the future with this,” tells Beal. “And I’ve tasted some very young whiskey that’s incredible, but if it were put in a bigger barrel for a longer amount of time it would be more than incredible, it would be world-class.” Those innovative spirits resting in barrels will change the industry in the future, just as the relatively new wave of small, independent distilleries has changed the current landscape. Beal says that creativity has made the industry even more fun. “I see people working, really trying to figure it out, and that’s the spirit that I love about independent distillers is that they are very creative,” he said. “That entrepreneurial spirit has taken people down the route of being a distiller as much as it does and used to, to be a winemaker, for example, or a craft brewer. I won’t say that doesn’t happen in Australia or Japan or somewhere else, because I do see similar sorts of phenomena, but I think in America it’s a particularly powerful thing, because in a way it’s part of the next frontier for us. If people find a way to build a rocket in their backyard and fly to the moon they’ll do it. Distilling is just a little more attainable.”

supercap.it Stephen Beal, Keeper of the Quaich, Spirits Ambassador to the World, and Whisky Magazine Hall of Famer can be found at www.srwhiskymaster.com.