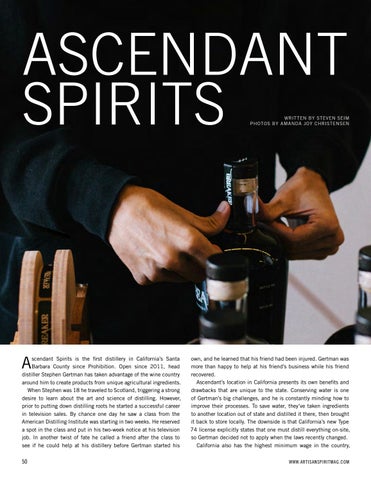 scendant Spirits is the first distillery in California’s Santa Barbara County since Prohibition. Open since 2011, head distiller Stephen Gertman has taken advantage of the wine country around him to create products from unique agricultural ingredients. When Stephen was 18 he traveled to Scotland, triggering a strong desire to learn about the art and science of distilling. However, prior to putting down distilling roots he started a successful career in television sales. By chance one day he saw a class from the American Distilling Institute was starting in two weeks. He reserved a spot in the class and put in his two-week notice at his television job. In another twist of fate he called a friend after the class to see if he could help at his distillery before Gertman started his

own, and he learned that his friend had been injured. Gertman was more than happy to help at his friend’s business while his friend recovered. Ascendant’s location in California presents its own benefits and drawbacks that are unique to the state. Conserving water is one of Gertman’s big challenges, and he is constantly minding how to improve their processes. To save water, they’ve taken ingredients to another location out of state and distilled it there, then brought it back to store locally. The downside is that California’s new Type 74 license explicitly states that one must distill everything on-site, so Gertman decided not to apply when the laws recently changed. California also has the highest minimum wage in the country, WWW.ARTISANSPIRITMAG.COM