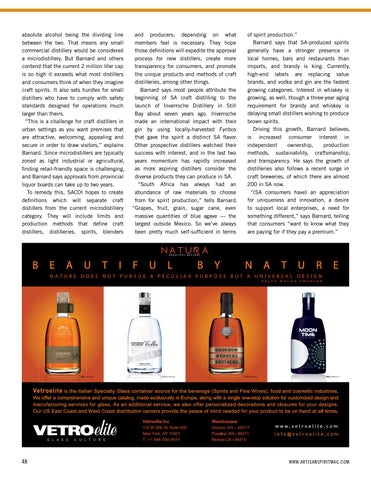 absolute alcohol being the dividing line between the two. That means any small commercial distillery would be considered a microdistillery. But Barnard and others contend that the current 2 million liter cap is so high it exceeds what most distillers and consumers think of when they imagine craft spirits. It also sets hurdles for small distillers who have to comply with safety standards designed for operations much larger than theirs. “This is a challenge for craft distillers in urban settings as you want premises that are attractive, welcoming, appealing and secure in order to draw visitors,” explains Barnard. Since microdistillers are typically zoned as light industrial or agricultural, finding retail-friendly space is challenging, and Barnard says approvals from provincial liquor boards can take up to two years. To remedy this, SACDI hopes to create definitions which will separate craft distillers from the current microdistillery category. They will include limits and production methods that define craft distillers, distilleries, spirits, blenders

and producers, depending on what members feel is necessary. They hope those definitions will expedite the approval process for new distillers, create more transparency for consumers, and promote the unique products and methods of craft distilleries, among other things. Barnard says most people attribute the beginning of SA craft distilling to the launch of Inverroche Distillery in Still Bay about seven years ago. Inverroche made an international impact with their gin by using locally-harvested Fynbos that gave the spirit a distinct SA flavor. Other prospective distillers watched their success with interest, and in the last two years momentum has rapidly increased as more aspiring distillers consider the diverse products they can produce in SA. “South Africa has always had an abundance of raw materials to choose from for spirit production,” tells Barnard. “Grapes, fruit, grain, sugar cane, even massive quantities of blue agave — the largest outside Mexico. So we’ve always been pretty much self-sufficient in terms

of spirit production.” Barnard says that SA-produced spirits generally have a stronger presence in local homes, bars and restaurants than imports, and brandy is king. Currently, high-end labels are replacing value brands, and vodka and gin are the fastest growing categories. Interest in whiskey is growing, as well, though a three-year aging requirement for brandy and whiskey is delaying small distillers wishing to produce brown spirits. Driving this growth, Barnard believes, is increased consumer interest in independent ownership, production methods, sustainability, craftsmanship, and transparency. He says the growth of distilleries also follows a recent surge in craft breweries, of which there are almost 200 in SA now. “(SA consumers have) an appreciation for uniqueness and innovation, a desire to support local enterprises, a need for something different,” says Barnard, telling that consumers “want to know what they are paying for if they pay a premium.”