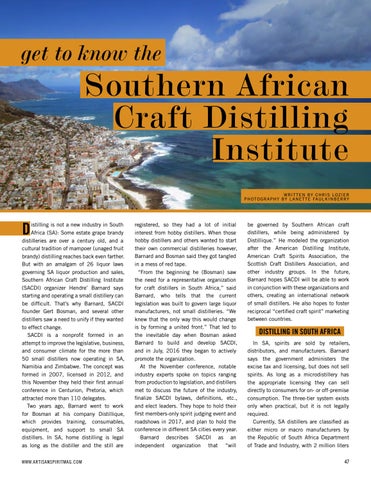 get to know the

istilling is not a new industry in South Africa (SA): Some estate grape brandy distilleries are over a century old, and a cultural tradition of mampoer (unaged fruit brandy) distilling reaches back even farther. But with an amalgam of 26 liquor laws governing SA liquor production and sales, Southern African Craft Distilling Institute (SACDI) organizer Hendre’ Barnard says starting and operating a small distillery can be difficult. That’s why Barnard, SACDI founder Gert Bosman, and several other distillers saw a need to unify if they wanted to effect change. SACDI is a nonprofit formed in an attempt to improve the legislative, business, and consumer climate for the more than 50 small distillers now operating in SA, Namibia and Zimbabwe. The concept was formed in 2007, licensed in 2012, and this November they held their first annual conference in Centurion, Pretoria, which attracted more than 110 delegates. Two years ago, Barnard went to work for Bosman at his company Distillique, which provides training, consumables, equipment, and support to small SA distillers. In SA, home distilling is legal as long as the distiller and the still are WWW.ARTISANSPIRITMAG.COM

registered, so they had a lot of initial interest from hobby distillers. When those hobby distillers and others wanted to start their own commercial distilleries however, Barnard and Bosman said they got tangled in a mess of red tape. “From the beginning he (Bosman) saw the need for a representative organization for craft distillers in South Africa,” said Barnard, who tells that the current legislation was built to govern large liquor manufacturers, not small distilleries. “We knew that the only way this would change is by forming a united front.” That led to the inevitable day when Bosman asked Barnard to build and develop SACDI, and in July, 2016 they began to actively promote the organization. At the November conference, notable industry experts spoke on topics ranging from production to legislation, and distillers met to discuss the future of the industry, finalize SACDI bylaws, definitions, etc., and elect leaders. They hope to hold their first members-only spirit judging event and roadshows in 2017, and plan to hold the conference in different SA cities every year. Barnard describes SACDI as an independent organization that “will

be governed by Southern African craft distillers, while being administered by Distillique.” He modeled the organization after the American Distilling Institute, American Craft Spirits Association, the Scottish Craft Distillers Association, and other industry groups. In the future, Barnard hopes SACDI will be able to work in conjunction with these organizations and others, creating an international network of small distillers. He also hopes to foster reciprocal “certified craft spirit” marketing between countries.

DISTILLING IN SOUTH AFRICA In SA, spirits are sold by retailers, distributors, and manufacturers. Barnard says the government administers the excise tax and licensing, but does not sell spirits. As long as a microdistillery has the appropriate licensing they can sell directly to consumers for on- or off-premise consumption. The three-tier system exists only when practical, but it is not legally required. Currently, SA distillers are classified as either micro or macro manufacturers by the Republic of South Africa Department of Trade and Industry, with 2 million liters