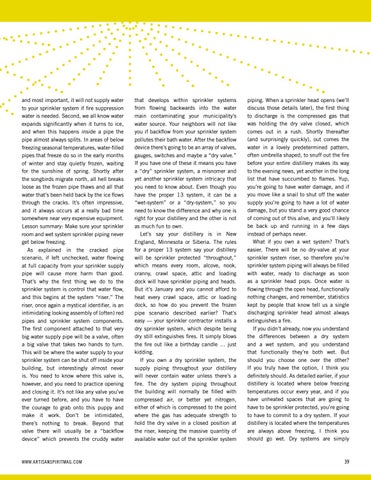 and most important, it will not supply water to your sprinkler system if fire suppression water is needed. Second, we all know water expands significantly when it turns to ice, and when this happens inside a pipe the pipe almost always splits. In areas of below freezing seasonal temperatures, water-filled pipes that freeze do so in the early months of winter and stay quietly frozen, waiting for the sunshine of spring. Shortly after the songbirds migrate north, all hell breaks loose as the frozen pipe thaws and all that water that’s been held back by the ice flows through the cracks. It’s often impressive, and it always occurs at a really bad time somewhere near very expensive equipment. Lesson summary: Make sure your sprinkler room and wet system sprinkler piping never get below freezing. As explained in the cracked pipe scenario, if left unchecked, water flowing at full capacity from your sprinkler supply pipe will cause more harm than good. That’s why the first thing we do to the sprinkler system is control that water flow, and this begins at the system “riser.” The riser, once again a mystical identifier, is an intimidating looking assembly of (often) red pipes and sprinkler system components. The first component attached to that very big water supply pipe will be a valve, often a big valve that takes two hands to turn. This will be where the water supply to your sprinkler system can be shut off inside your building, but interestingly almost never is. You need to know where this valve is, however, and you need to practice opening and closing it. It’s not like any valve you’ve ever turned before, and you have to have the courage to grab onto this puppy and make it work. Don’t be intimidated, there’s nothing to break. Beyond that valve there will usually be a “backflow device” which prevents the cruddy water

that develops within sprinkler systems from flowing backwards into the water main contaminating your municipality’s water source. Your neighbors will not like you if backflow from your sprinkler system pollutes their bath water. After the backflow device there’s going to be an array of valves, gauges, switches and maybe a “dry valve.” If you have one of these it means you have a “dry” sprinkler system, a misnomer and yet another sprinkler system intricacy that you need to know about. Even though you have the proper 13 system, it can be a “wet-system” or a “dry-system,” so you need to know the difference and why one is right for your distillery and the other is not as much fun to own. Let’s say your distillery is in New England, Minnesota or Siberia. The rules for a proper 13 system say your distillery will be sprinkler protected “throughout,” which means every room, alcove, nook, cranny, crawl space, attic and loading dock will have sprinkler piping and heads. But it’s January and you cannot afford to heat every crawl space, attic or loading dock, so how do you prevent the frozen pipe scenario described earlier? That’s easy — your sprinkler contractor installs a dry sprinkler system, which despite being dry still extinguishes fires. It simply blows the fire out like a birthday candle … just kidding. If you own a dry sprinkler system, the supply piping throughout your distillery will never contain water unless there’s a fire. The dry system piping throughout the building will normally be filled with compressed air, or better yet nitrogen, either of which is compressed to the point where the gas has adequate strength to hold the dry valve in a closed position at the riser, keeping the massive quantity of available water out of the sprinkler system

piping. When a sprinkler head opens (we’ll discuss those details later), the first thing to discharge is the compressed gas that was holding the dry valve closed, which comes out in a rush. Shortly thereafter (and surprisingly quickly), out comes the water in a lovely predetermined pattern, often umbrella shaped, to snuff out the fire before your entire distillery makes its way to the evening news, yet another in the long list that have succumbed to flames. Yup, you’re going to have water damage, and if you move like a snail to shut off the water supply you’re going to have a lot of water damage, but you stand a very good chance of coming out of this alive, and you’ll likely be back up and running in a few days instead of perhaps never. What if you own a wet system? That’s easier. There will be no dry-valve at your sprinkler system riser, so therefore you’re sprinkler system piping will always be filled with water, ready to discharge as soon as a sprinkler head pops. Once water is flowing through the open head, functionally nothing changes, and remember, statistics kept by people that know tell us a single discharging sprinkler head almost always extinguishes a fire. If you didn’t already, now you understand the differences between a dry system and a wet system, and you understand that functionally they’re both wet. But should you choose one over the other? If you truly have the option, I think you definitely should. As detailed earlier, if your distillery is located where below freezing temperatures occur every year, and if you have unheated spaces that are going to have to be sprinkler protected, you’re going to have to commit to a dry system. If your distillery is located where the temperatures are always above freezing, I think you should go wet. Dry systems are simply