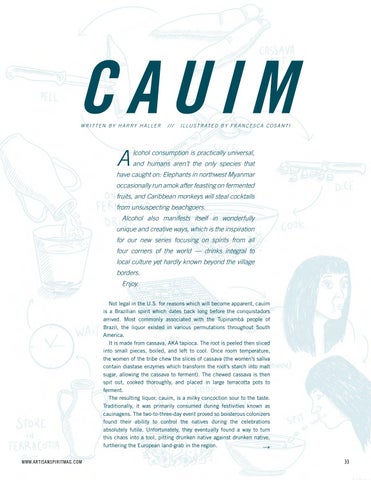 lcohol consumption is practically universal, and humans aren’t the only species that

have caught on: Elephants in northwest Myanmar occasionally run amok after feasting on fermented fruits, and Caribbean monkeys will steal cocktails from unsuspecting beachgoers. Alcohol also manifests itself in wonderfully unique and creative ways, which is the inspiration for our new series focusing on spirits from all four corners of the world ­— drinks integral to local culture yet hardly known beyond the village borders. Enjoy. Not legal in the U.S. for reasons which will become apparent, cauim is a Brazilian spirit which dates back long before the conquistadors arrived. Most commonly associated with the Tupinambá people of Brazil, the liquor existed in various permutations throughout South America. It is made from cassava, AKA tapioca. The root is peeled then sliced into small pieces, boiled, and left to cool. Once room temperature, the women of the tribe chew the slices of cassava (the women's saliva contain diastase enzymes which transform the root's starch into malt sugar, allowing the cassava to ferment). The chewed cassava is then spit out, cooked thoroughly, and placed in large terracotta pots to ferment. The resulting liquor, cauim, is a milky concoction sour to the taste. Traditionally, it was primarily consumed during festivities known as cauinagens. The two-to-three-day event proved so boisterous colonizers found their ability to control the natives during the celebrations absolutely futile. Unfortunately, they eventually found a way to turn this chaos into a tool, pitting drunken native against drunken native, furthering the European land-grab in the region. → WWW.ARTISANSPIRITMAG.COM