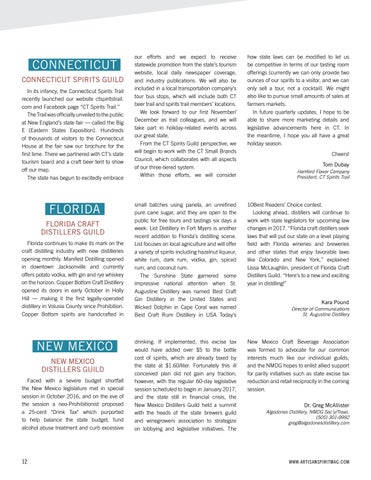 CONNECTICUT CONNECTICUT SPIRITS GUILD In its infancy, the Connecticut Spirits Trail recently launched our website ctspiritstrail. com and Facebook page “CT Spirits Trail.” The Trail was officially unveiled to the public at New England’s state fair — called the Big E (Eastern States Exposition). Hundreds of thousands of visitors to the Connecticut House at the fair saw our brochure for the first time. There we partnered with CT’s state tourism board and a craft beer tent to show off our map. The state has begun to excitedly embrace

NEW MEXICO NEW MEXICO DISTILLERS GUILD Faced with a severe budget shortfall the New Mexico legislature met in special session in October 2016, and on the eve of the session a neo-Prohibitionist proposed a 25-cent "Drink Tax" which purported to help balance the state budget, fund alcohol abuse treatment and curb excessive

our efforts and we expect to receive statewide promotion from the state’s tourism website, local daily newspaper coverage, and industry publications. We will also be included in a local transportation company’s tour bus stops, which will include both CT beer trail and spirits trail members’ locations. We look forward to our first November/ December as trail colleagues, and we will take part in holiday-related events across our great state. From the CT Spirits Guild perspective, we will begin to work with the CT Small Brands Council, which collaborates with all aspects of our three-tiered system. Within those efforts, we will consider

how state laws can be modified to let us be competitive in terms of our tasting room offerings (currently we can only provide two ounces of our spirits to a visitor, and we can only sell a tour, not a cocktail). We might also like to pursue small amounts of sales at farmers markets. In future quarterly updates, I hope to be able to share more marketing details and legislative advancements here in CT. In the meantime, I hope you all have a great holiday season.

10Best Readers’ Choice contest. Looking ahead, distillers will continue to work with state legislators for upcoming law changes in 2017. “Florida craft distillers seek laws that will put our state on a level playing field with Florida wineries and breweries and other states that enjoy favorable laws like Colorado and New York,” explained Lissa McLaughlin, president of Florida Craft Distillers Guild. “Here’s to a new and exciting year in distilling!”

drinking. If implemented, this excise tax would have added over $5 to the bottle cost of spirits, which are already taxed by the state at $1.60/liter. Fortunately this ill conceived plan did not gain any traction; however, with the regular 60-day legislative session scheduled to begin in January 2017, and the state still in financial crisis, the New Mexico Distillers Guild held a summit with the heads of the state brewers guild and winegrowers association to strategize on lobbying and legislative initiatives. The

New Mexico Craft Beverage Association was formed to advocate for our common interests much like our individual guilds, and the NMDG hopes to enlist allied support for parity initiatives such as state excise tax reduction and retail reciprocity in the coming session.