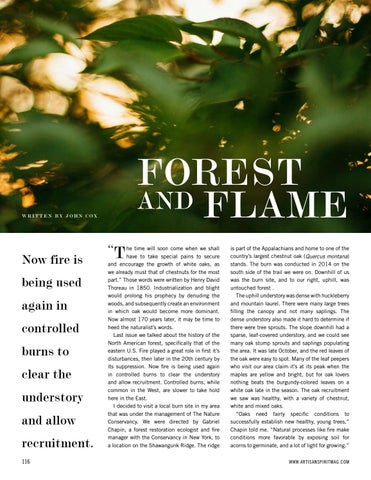 Now fire is being used again in controlled burns to clear the understory and allow recruitment. 116

and encourage the growth of white oaks, as we already must that of chestnuts for the most part.” Those words were written by Henry David Thoreau in 1850. Industrialization and blight would prolong his prophecy by denuding the woods, and subsequently create an environment in which oak would become more dominant. Now almost 170 years later, it may be time to heed the naturalist’s words. Last issue we talked about the history of the North American forest, specifically that of the eastern U.S. Fire played a great role in first it’s disturbances, then later in the 20th century by its suppression. Now fire is being used again in controlled burns to clear the understory and allow recruitment. Controlled burns, while common in the West, are slower to take hold here in the East. I decided to visit a local burn site in my area that was under the management of The Nature Conservancy. We were directed by Gabriel Chapin, a forest restoration ecologist and fire manager with the Conservancy in New York, to a location on the Shawangunk Ridge. The ridge

is part of the Appalachians and home to one of the country’s largest chestnut oak (Quercus montana) stands. The burn was conducted in 2014 on the south side of the trail we were on. Downhill of us was the burn site, and to our right, uphill, was untouched forest . The uphill understory was dense with huckleberry and mountain laurel. There were many large trees filling the canopy and not many saplings. The dense understory also made it hard to determine if there were tree sprouts. The slope downhill had a sparse, leaf-covered understory, and we could see many oak stump sprouts and saplings populating the area. It was late October, and the red leaves of the oak were easy to spot. Many of the leaf peepers who visit our area claim it’s at its peak when the maples are yellow and bright, but for oak lovers nothing beats the burgundy-colored leaves on a white oak late in the season. The oak recruitment we saw was healthy, with a variety of chestnut, white and mixed oaks. “Oaks need fairly specific conditions to successfully establish new healthy, young trees,” Chapin told me. “Natural processes like fire make conditions more favorable by exposing soil for acorns to germinate, and a lot of light for growing.” WWW.ARTISANSPIRITMAG.COM