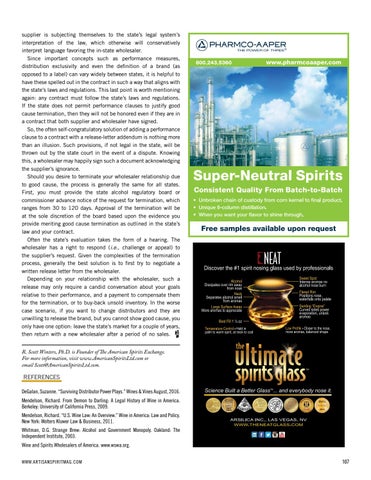 supplier is subjecting themselves to the state’s legal system’s interpretation of the law, which otherwise will conservatively interpret language favoring the in-state wholesaler. Since important concepts such as performance measures, distribution exclusivity and even the definition of a brand (as opposed to a label) can vary widely between states, it is helpful to have these spelled out in the contract in such a way that aligns with the state’s laws and regulations. This last point is worth mentioning again: any contract must follow the state’s laws and regulations. If the state does not permit performance clauses to justify good cause termination, then they will not be honored even if they are in a contract that both supplier and wholesaler have signed. So, the often self-congratulatory solution of adding a performance clause to a contract with a release-letter addendum is nothing more than an illusion. Such provisions, if not legal in the state, will be thrown out by the state court in the event of a dispute. Knowing this, a wholesaler may happily sign such a document acknowledging the supplier’s ignorance. Should you desire to terminate your wholesaler relationship due to good cause, the process is generally the same for all states. First, you must provide the state alcohol regulatory board or commissioner advance notice of the request for termination, which ranges from 30 to 120 days. Approval of the termination will be at the sole discretion of the board based upon the evidence you provide meriting good cause termination as outlined in the state’s law and your contract. Often the state’s evaluation takes the form of a hearing. The wholesaler has a right to respond (i.e., challenge or appeal) to the supplier’s request. Given the complexities of the termination process, generally the best solution is to first try to negotiate a written release letter from the wholesaler. Depending on your relationship with the wholesaler, such a release may only require a candid conversation about your goals relative to their performance, and a payment to compensate them for the termination, or to buy-back unsold inventory. In the worse case scenario, if you want to change distributors and they are unwilling to release the brand, but you cannot show good cause, you only have one option: leave the state’s market for a couple of years, then return with a new wholesaler after a period of no sales. R. Scott Winters, Ph.D. is Founder of The American Spirits Exchange. For more information, visit www.AmericanSpiritsLtd.com or email Scott@AmericanSpiritsLtd.com.

Mendelson, Richard. From Demon to Darling: A Legal History of Wine in America. Berkeley: University of California Press, 2009.