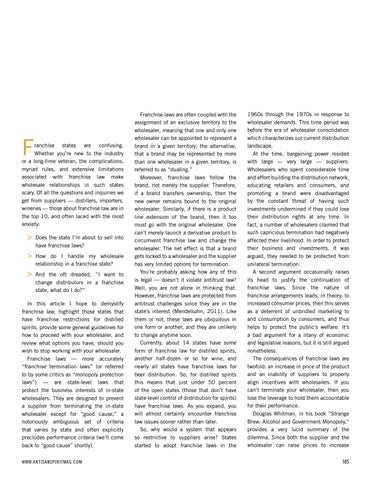 ranchise states are confusing. Whether you’re new to the industry or a long-time veteran, the complications, myriad rules, and extensive limitations associated with franchise law make wholesale relationships in such states scary. Of all the questions and inquiries we get from suppliers — distillers, importers, wineries — those about franchise law are in the top 10, and often laced with the most anxiety:

>> Does the state I’m about to sell into have franchise laws?

do I handle my wholesale relationship in a franchise state?

the oft dreaded, “I want to change distributors in a franchise state, what do I do?”

In this article I hope to demystify franchise law, highlight those states that have franchise restrictions for distilled spirits, provide some general guidelines for how to proceed with your wholesaler, and review what options you have, should you wish to stop working with your wholesaler. Franchise laws — more accurately “franchise termination laws” (or referred to by some critics as “monopoly protection laws”) — are state-level laws that protect the business interests of in-state wholesalers. They are designed to prevent a supplier from terminating the in-state wholesaler except for “good cause,” a notoriously ambiguous set of criteria that varies by state and often explicitly precludes performance criteria (we’ll come back to “good cause” shortly). WWW.ARTISANSPIRITMAG.COM

Franchise laws are often coupled with the assignment of an exclusive territory to the wholesaler, meaning that one and only one wholesaler can be appointed to represent a brand in a given territory; the alternative, that a brand may be represented by more than one wholesaler in a given territory, is referred to as “dualing.” Moreover, franchise laws follow the brand, not merely the supplier. Therefore, if a brand transfers ownership, then the new owner remains bound to the original wholesaler. Similarly, if there is a product line extension of the brand, then it too must go with the original wholesaler. One can’t merely launch a derivative product to circumvent franchise law and change the wholesaler. The net effect is that a brand gets locked to a wholesaler and the supplier has very limited options for termination. You’re probably asking how any of this is legal — doesn’t it violate antitrust law? Well, you are not alone in thinking that. However, franchise laws are protected from antitrust challenges since they are in the state’s interest (Mendelsohn, 2011). Like them or not, these laws are ubiquitous in one form or another, and they are unlikely to change anytime soon. Currently, about 14 states have some form of franchise law for distilled spirits, another half-dozen or so for wine, and nearly all states have franchise laws for beer distribution. So, for distilled spirits this means that just under 50 percent of the open states (those that don’t have state-level control of distribution for spirits) have franchise laws. As you expand, you will almost certainly encounter franchise law issues sooner rather than later. So, why would a system that appears so restrictive to suppliers arise? States started to adopt franchise laws in the

1960s through the 1970s in response to wholesaler demands. This time period was before the era of wholesaler consolidation which characterizes our current distribution landscape. At the time, bargaining power resided with large — very large — suppliers. Wholesalers who spent considerable time and effort building the distribution network, educating retailers and consumers, and promoting a brand were disadvantaged by the constant threat of having such investments undermined if they could lose their distribution rights at any time. In fact, a number of wholesalers claimed that such capricious termination had negatively affected their livelihood. In order to protect their business and investments, it was argued, they needed to be protected from unilateral termination. A second argument occasionally raises its head to justify the continuation of franchise laws. Since the nature of franchise arrangements leads, in theory, to increased consumer prices, then this serves as a deterrent of unbridled marketing to and consumption by consumers, and thus helps to protect the public’s welfare. It’s a bad argument for a litany of economic and legislative reasons, but it is still argued nonetheless. The consequences of franchise laws are twofold: an increase in price of the product and an inability of suppliers to properly align incentives with wholesalers. If you can’t terminate your wholesaler, then you lose the leverage to hold them accountable for their performance. Douglas Whitman, in his book “Strange Brew: Alcohol and Government Monopoly,” provides a very lucid summary of the dilemma. Since both the supplier and the wholesaler can raise prices to increase