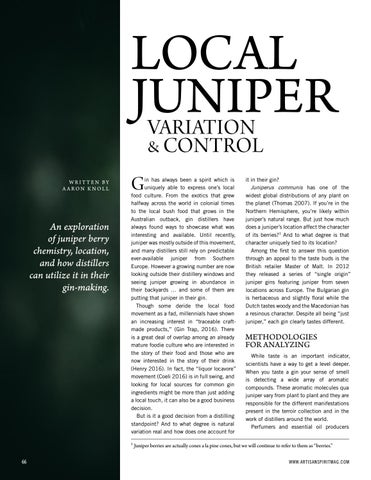 An exploration of juniper berry chemistry, location, and how distillers can utilize it in their gin-making.

in has always been a spirit which is uniquely able to express one’s local food culture. From the exotics that grew halfway across the world in colonial times to the local bush food that grows in the Australian outback, gin distillers have always found ways to showcase what was interesting and available. Until recently, juniper was mostly outside of this movement, and many distillers still rely on predictable ever-available juniper from Southern Europe. However a growing number are now looking outside their distillery windows and seeing juniper growing in abundance in their backyards … and some of them are putting that juniper in their gin. Though some deride the local food movement as a fad, millennials have shown an increasing interest in “traceable craftmade products,” (Gin Trap, 2016). There is a great deal of overlap among an already mature foodie culture who are interested in the story of their food and those who are now interested in the story of their drink (Henry 2016). In fact, the “liquor locavore” movement (Coeli 2016) is in full swing, and looking for local sources for common gin ingredients might be more than just adding a local touch, it can also be a good business decision. But is it a good decision from a distilling standpoint? And to what degree is natural variation real and how does one account for 1

it in their gin? Juniperus communis has one of the widest global distributions of any plant on the planet (Thomas 2007). If you’re in the Northern Hemisphere, you’re likely within juniper’s natural range. But just how much does a juniper’s location affect the character of its berries?1 And to what degree is that character uniquely tied to its location? Among the first to answer this question through an appeal to the taste buds is the British retailer Master of Malt. In 2012 they released a series of “single origin” juniper gins featuring juniper from seven locations across Europe. The Bulgarian gin is herbaceous and slightly floral while the Dutch tastes woody and the Macedonian has a resinous character. Despite all being “just juniper,” each gin clearly tastes different.

METHODOLOGIES FOR ANALYZING While taste is an important indicator, scientists have a way to get a level deeper. When you taste a gin your sense of smell is detecting a wide array of aromatic compounds. These aromatic molecules qua juniper vary from plant to plant and they are responsible for the different manifestations present in the terroir collection and in the work of distillers around the world. Perfumers and essential oil producers

Juniper berries are actually cones a la pine cones, but we will continue to refer to them as “berries.” WWW.ARTISANSPIRITMAG.COM