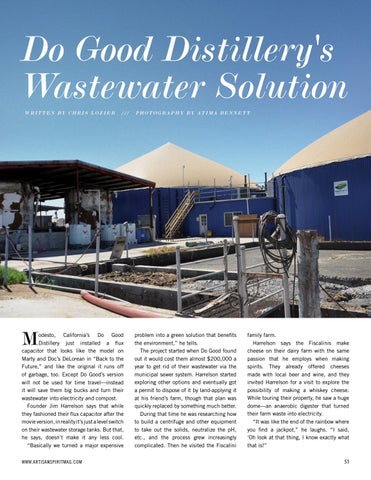 odesto, California’s Do Good Distillery just installed a flux capacitor that looks like the model on Marty and Doc’s DeLorean in “Back to the Future,” and like the original it runs off of garbage, too. Except Do Good’s version will not be used for time travel—instead it will save them big bucks and turn their wastewater into electricity and compost. Founder Jim Harrelson says that while they fashioned their flux capacitor after the movie version, in reality it’s just a level switch on their wastewater storage tanks. But that, he says, doesn’t make it any less cool. “Basically we turned a major expensive WWW.ARTISANSPIRITMAG.COM

problem into a green solution that benefits the environment,” he tells. The project started when Do Good found out it would cost them almost $200,000 a year to get rid of their wastewater via the municipal sewer system. Harrelson started exploring other options and eventually got a permit to dispose of it by land-applying it at his friend’s farm, though that plan was quickly replaced by something much better. During that time he was researching how to build a centrifuge and other equipment to take out the solids, neutralize the pH, etc., and the process grew increasingly complicated. Then he visited the Fiscalini

family farm. Harrelson says the Fiscalinis make cheese on their dairy farm with the same passion that he employs when making spirits. They already offered cheeses made with local beer and wine, and they invited Harrelson for a visit to explore the possibility of making a whiskey cheese. While touring their property, he saw a huge dome—an anaerobic digester that turned their farm waste into electricity. “It was like the end of the rainbow where you find a jackpot,” he laughs. “I said, ‘Oh look at that thing, I know exactly what that is!”