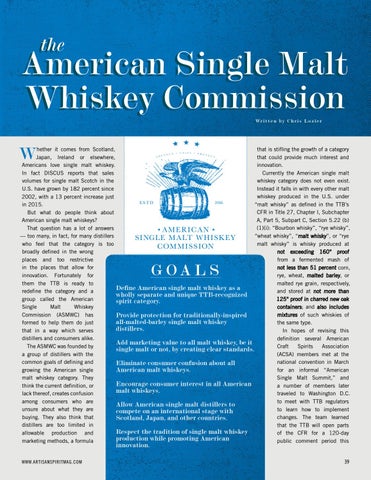 that is stifling the growth of a category hether it comes from Scotland, that could provide much interest and Japan, Ireland or elsewhere, innovation. Americans love single malt whiskey. Currently the American single malt In fact DISCUS reports that sales whiskey category does not even exist. volumes for single malt Scotch in the Instead it falls in with every other malt U.S. have grown by 182 percent since whiskey produced in the U.S. under 2002, with a 13 percent increase just ES T D 2016 “malt whisky” as defined in the TTB’s in 2015. CFR in Title 27, Chapter I, Subchapter But what do people think about A, Part 5, Subpart C, Section 5.22 (b) American single malt whiskeys? (1)(i): “Bourbon whisky”, “rye whisky”, That question has a lot of answers AMERICAN “wheat whisky”, “malt whisky”, or “rye — too many, in fact, for many distillers SI NGL E M A LT W H I SK EY who feel that the category is too malt whisky” is whisky produced at COM M I S S ION broadly defined in the wrong not exceeding 160° proof places and too restrictive from a fermented mash of in the places that allow for not less than 51 percent corn, innovation. Fortunately for rye, wheat, malted barley, or them the TTB is ready to malted rye grain, respectively, Define American single malt whiskey as a redefine the category and a and stored at not more than wholly separate and unique TTB-recognized group called the American 125° proof in charred new oak spirit category. Single Malt Whiskey containers; and also includes Commission (ASMWC) has mixtures of such whiskies of Provide protection for traditionally-inspired all-malted-barley single malt whiskey formed to help them do just the same type. distillers. that in a way which serves In hopes of revising this distillers and consumers alike. definition several American Add marketing value to all malt whiskey, be it The ASMWC was founded by Craft Spirits Association single malt or not, by creating clear standards. a group of distillers with the (ACSA) members met at the common goals of defining and national convention in March Eliminate consumer confusion about all growing the American single for an informal “American American malt whiskeys. malt whiskey category. They Single Malt Summit,” and Encourage consumer interest in all American think the current definition, or a number of members later malt whiskeys. lack thereof, creates confusion traveled to Washington D.C. among consumers who are to meet with TTB regulators Allow American single malt distillers to unsure about what they are to learn how to implement compete on an international stage with buying. They also think that changes. The team learned Scotland, Japan, and other countries. distillers are too limited in that the TTB will open parts Respect the tradition of single malt whiskey allowable production and of the CFR for a 120-day production while promoting American marketing methods, a formula public comment period this