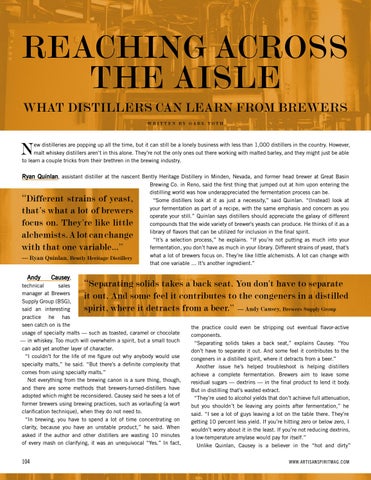 ew distilleries are popping up all the time, but it can still be a lonely business with less than 1,000 distillers in the country. However, malt whiskey distillers aren’t in this alone. They’re not the only ones out there working with malted barley, and they might just be able to learn a couple tricks from their brethren in the brewing industry.

“Different strains of yeast, that’s what a lot of brewers focus on. They’re like little alchemists. A lot can change with that one variable...” — Ryan Quinlan, Bently Heritage Distillery

Brewing Co. in Reno, said the first thing that jumped out at him upon entering the distilling world was how underappreciated the fermentation process can be. “Some distillers look at it as just a necessity,” said Quinlan. “(Instead) look at your fermentation as part of a recipe, with the same emphasis and concern as you operate your still.” Quinlan says distillers should appreciate the galaxy of different compounds that the wide variety of brewer&#39;s yeasts can produce. He thinks of it as a library of flavors that can be utilized for inclusion in the final spirit. “It’s a selection process,” he explains. “If you’re not putting as much into your fermentation, you don’t have as much in your library. Different strains of yeast, that’s what a lot of brewers focus on. They’re like little alchemists. A lot can change with that one variable ... It’s another ingredient.”

Andy Causey, technical sales manager at Brewers Supply Group (BSG), said an interesting practice he has seen catch on is the usage of specialty malts — such as toasted, caramel or chocolate — in whiskey. Too much will overwhelm a spirit, but a small touch can add yet another layer of character. “I couldn’t for the life of me figure out why anybody would use specialty malts,” he said. “But there’s a definite complexity that comes from using specialty malts.” Not everything from the brewing canon is a sure thing, though, and there are some methods that brewers-turned-distillers have adopted which might be reconsidered. Causey said he sees a lot of former brewers using brewing practices, such as vorlaufing (a wort clarification technique), when they do not need to. “In brewing, you have to spend a lot of time concentrating on clarity, because you have an unstable product,” he said. When asked if the author and other distillers are wasting 10 minutes of every mash on clarifying, it was an unequivocal “Yes.” In fact,

“Separating solids takes a back seat. You don’t have to separate it out. And some feel it contributes to the congeners in a distilled spirit, where it detracts from a beer.” — Andy Causey, Brewers Supply Group

the practice could even be stripping out eventual flavor-active components. “Separating solids takes a back seat,” explains Causey. “You don’t have to separate it out. And some feel it contributes to the congeners in a distilled spirit, where it detracts from a beer.” Another issue he’s helped troubleshoot is helping distillers achieve a complete fermentation. Brewers aim to leave some residual sugars — dextrins — in the final product to lend it body. But in distilling that’s wasted extract. “They’re used to alcohol yields that don’t achieve full attenuation, but you shouldn’t be leaving any points after fermentation,” he said. “I see a lot of guys leaving a lot on the table there. They’re getting 10 percent less yield. If you’re hitting zero or below zero, I wouldn’t worry about it in the least. If you’re not reducing dextrins, a low-temperature amylase would pay for itself.” Unlike Quinlan, Causey is a believer in the “hot and dirty” WWW.ARTISANSPIRITMAG.COM