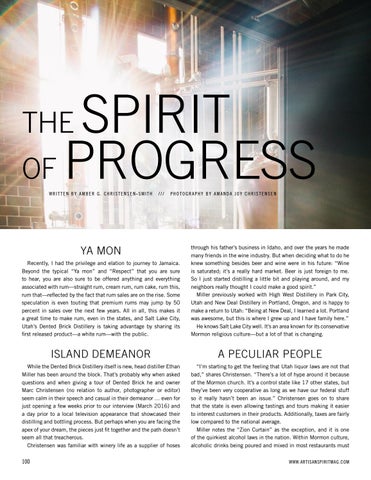 SPIRIT OF PROGRESS THE

Recently, I had the privilege and elation to journey to Jamaica. Beyond the typical “Ya mon” and “Respect” that you are sure to hear, you are also sure to be offered anything and everything associated with rum—straight rum, cream rum, rum cake, rum this, rum that—reflected by the fact that rum sales are on the rise. Some speculation is even touting that premium rums may jump by 50 percent in sales over the next few years. All in all, this makes it a great time to make rum, even in the states, and Salt Lake City, Utah’s Dented Brick Distillery is taking advantage by sharing its first released product—a white rum—with the public.

through his father’s business in Idaho, and over the years he made many friends in the wine industry. But when deciding what to do he knew something besides beer and wine were in his future: “Wine is saturated; it’s a really hard market. Beer is just foreign to me. So I just started distilling a little bit and playing around, and my neighbors really thought I could make a good spirit.” Miller previously worked with High West Distillery in Park City, Utah and New Deal Distillery in Portland, Oregon, and is happy to make a return to Utah: “Being at New Deal, I learned a lot. Portland was awesome, but this is where I grew up and I have family here.” He knows Salt Lake City well. It’s an area known for its conservative Mormon religious culture—but a lot of that is changing.

While the Dented Brick Distillery itself is new, head distiller Ethan Miller has been around the block. That’s probably why when asked questions and when giving a tour of Dented Brick he and owner Marc Christensen (no relation to author, photographer or editor) seem calm in their speech and casual in their demeanor … even for just opening a few weeks prior to our interview (March 2016) and a day prior to a local television appearance that showcased their distilling and bottling process. But perhaps when you are facing the apex of your dream, the pieces just fit together and the path doesn’t seem all that treacherous. Christensen was familiar with winery life as a supplier of hoses

“I’m starting to get the feeling that Utah liquor laws are not that bad,” shares Christensen. “There’s a lot of hype around it because of the Mormon church. It’s a control state like 17 other states, but they’ve been very cooperative as long as we have our federal stuff so it really hasn’t been an issue.” Christensen goes on to share that the state is even allowing tastings and tours making it easier to interest customers in their products. Additionally, taxes are fairly low compared to the national average. Miller notes the “Zion Curtain” as the exception, and it is one of the quirkiest alcohol laws in the nation. Within Mormon culture, alcoholic drinks being poured and mixed in most restaurants must