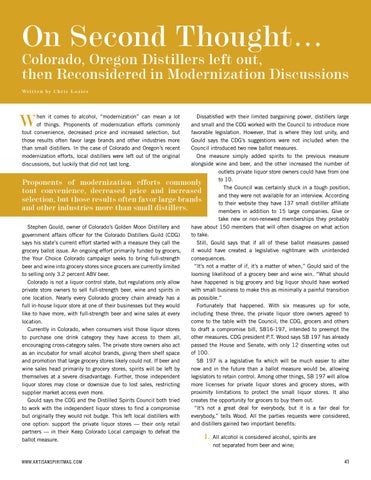 Dissatisfied with their limited bargaining power, distillers large and small and the CDG worked with the Council to introduce more favorable legislation. However, that is where they lost unity, and Gould says the CDG’s suggestions were not included when the Council introduced two new ballot measures. One measure simply added spirits to the previous measure alongside wine and beer, and the other increased the number of outlets private liquor store owners could have from one to 10. Proponents of modernization efforts commonly The Council was certainly stuck in a tough position, tout convenience, decreased price and increased and they were not available for an interview. According selection, but those results often favor large brands to their website they have 137 small distiller affiliate and other industries more than small distillers. members in addition to 15 large companies. Give or take new or non-renewed memberships they probably have about 150 members that will often disagree on what action Stephen Gould, owner of Colorado’s Golden Moon Distillery and to take. government affairs officer for the Colorado Distillers Guild (CDG) Still, Gould says that if all of these ballot measures passed says his state’s current effort started with a measure they call the it would have created a legislative nightmare with unintended grocery ballot issue. An ongoing effort primarily funded by grocers, consequences. the Your Choice Colorado campaign seeks to bring full-strength “It’s not a matter of if, it’s a matter of when,” Gould said of the beer and wine into grocery stores since grocers are currently limited looming likelihood of a grocery beer and wine win. “What should to selling only 3.2 percent ABV beer. have happened is big grocery and big liquor should have worked Colorado is not a liquor control state, but regulations only allow with small business to make this as minimally a painful transition private store owners to sell full-strength beer, wine and spirits in as possible.” one location. Nearly every Colorado grocery chain already has a Fortunately that happened. With six measures up for vote, full in-house liquor store at one of their businesses but they would including these three, the private liquor store owners agreed to like to have more, with full-strength beer and wine sales at every come to the table with the Council, the CDG, grocers and others location. to draft a compromise bill, SB16-197, intended to preempt the Currently in Colorado, when consumers visit those liquor stores other measures. CDG president P.T. Wood says SB 197 has already to purchase one drink category they have access to them all, passed the House and Senate, with only 12 dissenting votes out encouraging cross-category sales. The private store owners also act of 100. as an incubator for small alcohol brands, giving them shelf space SB 197 is a legislative fix which will be much easier to alter and promotion that large grocery stores likely could not. If beer and now and in the future than a ballot measure would be, allowing wine sales head primarily to grocery stores, spirits will be left by legislators to retain control. Among other things, SB 197 will allow themselves at a severe disadvantage. Further, those independent more licenses for private liquor stores and grocery stores, with liquor stores may close or downsize due to lost sales, restricting proximity limitations to protect the small liquor stores. It also supplier market access even more. creates the opportunity for grocers to buy them out. Gould says the CDG and the Distilled Spirits Council both tried “It’s not a great deal for everybody, but it is a fair deal for to work with the independent liquor stores to find a compromise everybody,” tells Wood. All the parties requests were considered, but originally they would not budge. This left local distillers with and distillers gained two important benefits: one option: support the private liquor stores — their only retail partners — in their Keep Colorado Local campaign to defeat the 1. All alcohol is considered alcohol, spirits are ballot measure. not separated from beer and wine;

hen it comes to alcohol, “modernization” can mean a lot of things. Proponents of modernization efforts commonly tout convenience, decreased price and increased selection, but those results often favor large brands and other industries more than small distillers. In the case of Colorado and Oregon’s recent modernization efforts, local distillers were left out of the original discussions, but luckily that did not last long.