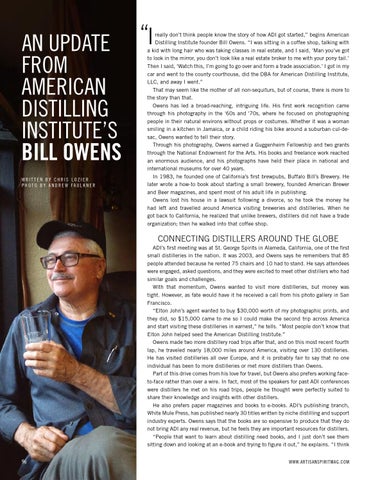 really don’t think people know the story of how ADI got started,” begins American Distilling Institute founder Bill Owens. “I was sitting in a coffee shop, talking with a kid with long hair who was taking classes in real estate, and I said, ‘Man you’ve got to look in the mirror, you don’t look like a real estate broker to me with your pony tail.’ Then I said, ‘Watch this, I’m going to go over and form a trade association.’ I got in my car and went to the county courthouse, did the DBA for American Distilling Institute, LLC, and away I went.” That may seem like the mother of all non-sequiturs, but of course, there is more to the story than that. Owens has led a broad-reaching, intriguing life. His first work recognition came through his photography in the &#39;60s and &#39;70s, where he focused on photographing people in their natural environs without props or costumes. Whether it was a woman smiling in a kitchen in Jamaica, or a child riding his bike around a suburban cul-desac, Owens wanted to tell their story. Through his photography, Owens earned a Guggenheim Fellowship and two grants through the National Endowment for the Arts. His books and freelance work reached an enormous audience, and his photographs have held their place in national and international museums for over 40 years. In 1983, he founded one of California’s first brewpubs, Buffalo Bill’s Brewery. He later wrote a how-to book about starting a small brewery, founded American Brewer and Beer magazines, and spent most of his adult life in publishing. Owens lost his house in a lawsuit following a divorce, so he took the money he had left and travelled around America visiting breweries and distilleries. When he got back to California, he realized that unlike brewers, distillers did not have a trade organization; then he walked into that coffee shop.

CONNECTING DISTILLERS AROUND THE GLOBE ADI’s first meeting was at St. George Spirits in Alameda, California, one of the first small distilleries in the nation. It was 2003, and Owens says he remembers that 85 people attended because he rented 75 chairs and 10 had to stand. He says attendees were engaged, asked questions, and they were excited to meet other distillers who had similar goals and challenges. With that momentum, Owens wanted to visit more distilleries, but money was tight. However, as fate would have it he received a call from his photo gallery in San Francisco. “Elton John’s agent wanted to buy $30,000 worth of my photographic prints, and they did, so $15,000 came to me so I could make the second trip across America and start visiting these distilleries in earnest,” he tells. “Most people don’t know that Elton John helped seed the American Distilling Institute.” Owens made two more distillery road trips after that, and on this most recent fourth lap, he traveled nearly 18,000 miles around America, visiting over 130 distilleries. He has visited distilleries all over Europe, and it is probably fair to say that no one individual has been to more distilleries or met more distillers than Owens. Part of this drive comes from his love for travel, but Owens also prefers working faceto-face rather than over a wire. In fact, most of the speakers for past ADI conferences were distillers he met on his road trips, people he thought were perfectly suited to share their knowledge and insights with other distillers. He also prefers paper magazines and books to e-books. ADI’s publishing branch, White Mule Press, has published nearly 30 titles written by niche distilling and support industry experts. Owens says that the books are so expensive to produce that they do not bring ADI any real revenue, but he feels they are important resources for distillers. “People that want to learn about distilling need books, and I just don’t see them sitting down and looking at an e-book and trying to figure it out,” he explains. “I think