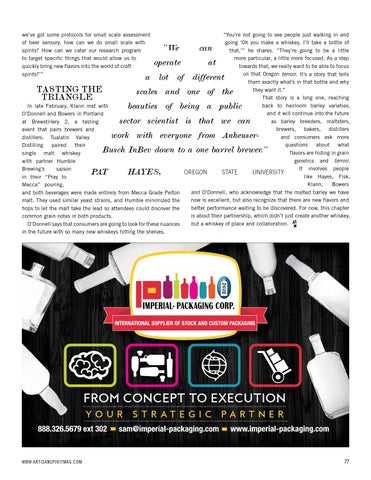 we’ve got some protocols for small scale assessment of beer sensory, how can we do small scale with spirits? How can we cater our research program to target specific things that would allow us to quickly bring new flavors into the world of craft spirits?’”

“You’re not going to see people just walking in and going ‘Oh you make a whiskey, I’ll take a bottle of that,’” he shares. “They’re going to be a little more particular, a little more focused. As a step towards that, we really want to be able to focus on that Oregon terroir. It’s a story that tells them exactly what’s in that bottle and why they want it.” That story is a long one, reaching back to heirloom barley varieties, and it will continue into the future as barley breeders, maltsters, brewers, bakers, distillers and consumers ask more questions about what flavors are hiding in grain genetics and terroir. It involves people OREGON STATE UNIVERSITY like Hayes, Fisk, Klann, Bowers and O’Donnell, who acknowledge that the malted barley we have now is excellent, but also recognize that there are new flavors and better performance waiting to be discovered. For now, this chapter is about their partnership, which didn’t just create another whiskey, but a whiskey of place and collaboration.

a lot of different

scales and one of the

beauties of being a public

In late February, Klann met with O’Donnell and Bowers in Portland at Brewstillery 2, a tasting event that pairs brewers and distillers. Tualatin Valley Distilling paired their single malt whiskey with partner Humble Brewing’s saison in their “Pray to Mecca” pouring, and both beverages were made entirely from Mecca Grade Pelton malt. They used similar yeast strains, and Humble minimized the hops to let the malt take the lead so attendees could discover the common grain notes in both products. O’Donnell says that consumers are going to look for these nuances in the future with so many new whiskeys hitting the shelves.

sector scientist is that we can

work with everyone from Anheuser-

Busch InBev down to a one barrel brewer.”

FROM CONCEPT TO EXECUTION YO UR