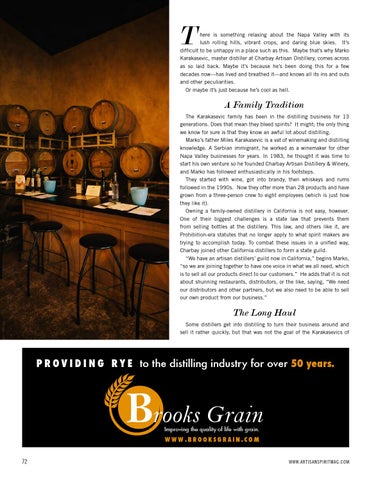 here is something relaxing about the Napa Valley with its lush rolling hills, vibrant crops, and daring blue skies. It’s difficult to be unhappy in a place such as this. Maybe that’s why Marko Karakasevic, master distiller at Charbay Artisan Distillery, comes across as so laid back. Maybe it’s because he’s been doing this for a few decades now—has lived and breathed it—and knows all its ins and outs and other peculiarities. Or maybe it’s just because he’s cool as hell.

A Family Tradition The Karakasevic family has been in the distilling business for 13 generations. Does that mean they bleed spirits? It might; the only thing we know for sure is that they know an awful lot about distilling. Marko’s father Miles Karakasevic is a vat of winemaking and distilling knowledge. A Serbian immigrant, he worked as a winemaker for other Napa Valley businesses for years. In 1983, he thought it was time to start his own venture so he founded Charbay Artisan Distillery &amp; Winery, and Marko has followed enthusiastically in his footsteps. They started with wine, got into brandy, then whiskeys and rums followed in the 1990s. Now they offer more than 28 products and have grown from a three-person crew to eight employees (which is just how they like it). Owning a family-owned distillery in California is not easy, however. One of their biggest challenges is a state law that prevents them from selling bottles at the distillery. This law, and others like it, are Prohibition-era statutes that no longer apply to what spirit makers are trying to accomplish today. To combat these issues in a unified way, Charbay joined other California distillers to form a state guild. “We have an artisan distillers’ guild now in California,” begins Marko, “so we are joining together to have one voice in what we all need, which is to sell all our products direct to our customers.” He adds that it is not about shunning restaurants, distributors, or the like, saying, “We need our distributors and other partners, but we also need to be able to sell our own product from our business.”

The Long Haul Some distillers get into distilling to turn their business around and sell it rather quickly, but that was not the goal of the Karakasevics of

Brooks Grain Improving the quality of life with grain.