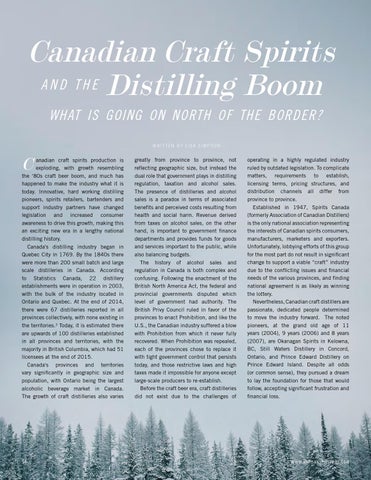 Canadian Craft Spirits A N D T H E Distilling Boom WHAT IS GOING ON NORTH OF THE BORDER? WRITTEN BY LISA SIMPSON

anadian craft spirits production is exploding, with growth resembling the ‘80s craft beer boom, and much has happened to make the industry what it is today. Innovative, hard working distilling pioneers, spirits retailers, bartenders and support industry partners have changed legislation and increased consumer awareness to drive this growth, making this an exciting new era in a lengthy national distilling history. Canada&#39;s distilling industry began in Quebec City in 1769. By the 1840s there were more than 200 small batch and large scale distilleries in Canada. According to Statistics Canada, 22 distillery establishments were in operation in 2003, with the bulk of the industry located in Ontario and Quebec. At the end of 2014, there were 67 distilleries reported in all provinces collectively, with none existing in the territories.3 Today, it is estimated there are upwards of 100 distilleries established in all provinces and territories, with the majority in British Columbia, which had 51 licensees at the end of 2015. Canada&#39;s provinces and territories vary significantly in geographic size and population, with Ontario being the largest alcoholic beverage market in Canada. The growth of craft distilleries also varies

greatly from province to province, not reflecting geographic size, but instead the dual role that government plays in distilling regulation, taxation and alcohol sales. The presence of distilleries and alcohol sales is a paradox in terms of associated benefits and perceived costs resulting from health and social harm. Revenue derived from taxes on alcohol sales, on the other hand, is important to government finance departments and provides funds for goods and services important to the public, while also balancing budgets. The history of alcohol sales and regulation in Canada is both complex and confusing. Following the enactment of the British North America Act, the federal and provincial governments disputed which level of government had authority. The British Privy Council ruled in favor of the provinces to enact Prohibition, and like the U.S., the Canadian industry suffered a blow with Prohibition from which it never fully recovered. When Prohibition was repealed, each of the provinces chose to replace it with tight government control that persists today, and those restrictive laws and high taxes made it impossible for anyone except large-scale producers to re-establish. Before the craft beer era, craft distilleries did not exist due to the challenges of

operating in a highly regulated industry ruled by outdated legislation. To complicate matters, requirements to establish, licensing terms, pricing structures, and distribution channels all differ from province to province. Established in 1947, Spirits Canada (formerly Association of Canadian Distillers) is the only national association representing the interests of Canadian spirits consumers, manufacturers, marketers and exporters. Unfortunately, lobbying efforts of this group for the most part do not result in significant change to support a viable “craft” industry due to the conflicting issues and financial needs of the various provinces, and finding national agreement is as likely as winning the lottery. Nevertheless, Canadian craft distillers are passionate, dedicated people determined to move the industry forward. The noted pioneers, at the grand old age of 11 years (2004), 9 years (2006) and 8 years (2007), are Okanagan Spirits in Kelowna, BC, Still Waters Distillery in Concord, Ontario, and Prince Edward Distillery on Prince Edward Island. Despite all odds (or common sense), they pursued a dream to lay the foundation for those that would follow, accepting significant frustration and financial loss.