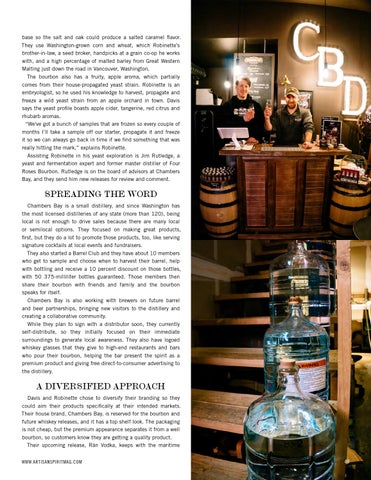 base so the salt and oak could produce a salted caramel flavor. They use Washington-grown corn and wheat, which Robinette’s brother-in-law, a seed broker, handpicks at a grain co-op he works with, and a high percentage of malted barley from Great Western Malting just down the road in Vancouver, Washington. The bourbon also has a fruity, apple aroma, which partially comes from their house-propagated yeast strain. Robinette is an embryologist, so he used his knowledge to harvest, propagate and freeze a wild yeast strain from an apple orchard in town. Davis says the yeast profile boasts apple cider, tangerine, red citrus and rhubarb aromas. “We&#39;ve got a bunch of samples that are frozen so every couple of months I’ll take a sample off our starter, propagate it and freeze it so we can always go back in time if we find something that was really hitting the mark,” explains Robinette. Assisting Robinette in his yeast exploration is Jim Rutledge, a yeast and fermentation expert and former master distiller of Four Roses Bourbon. Rutledge is on the board of advisors at Chambers Bay, and they send him new releases for review and comment.

SPREADING THE WORD Chambers Bay is a small distillery, and since Washington has the most licensed distilleries of any state (more than 120), being local is not enough to drive sales because there are many local or semilocal options. They focused on making great products, first, but they do a lot to promote those products, too, like serving signature cocktails at local events and fundraisers. They also started a Barrel Club and they have about 10 members who get to sample and choose when to harvest their barrel, help with bottling and receive a 10 percent discount on those bottles, with 50 375-milliliter bottles guaranteed. Those members then share their bourbon with friends and family and the bourbon speaks for itself. Chambers Bay is also working with brewers on future barrel and beer partnerships, bringing new visitors to the distillery and creating a collaborative community. While they plan to sign with a distributor soon, they currently self-distribute, so they initially focused on their immediate surroundings to generate local awareness. They also have logoed whiskey glasses that they give to high-end restaurants and bars who pour their bourbon, helping the bar present the spirit as a premium product and giving free direct-to-consumer advertising to the distillery.

A DIVERSIFIED APPROACH Davis and Robinette chose to diversify their branding so they could aim their products specifically at their intended markets. Their house brand, Chambers Bay, is reserved for the bourbon and future whiskey releases, and it has a top shelf look. The packaging is not cheap, but the premium appearance separates it from a well bourbon, so customers know they are getting a quality product. Their upcoming release, Rán Vodka, keeps with the maritime WWW.ARTISANSPIRITMAG.COM